First Families First had their final press conference before the referendum on same-sex marriage on Friday. During it John Waters addressed Mary McAleese, Ashers Bakery and the referendum commissioner. 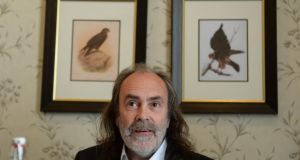 The First Families First group advocating a No vote in the forthcoming same-sex marriage referendum has said nobody has challenged their concerns on the change to the Constitution proving there is something “deeply worrying” about the proposed amendment.

Three weeks ago the group - comprising journalist John Waters, former MEP Kathy Sinnott and Dublin-based psychotherapist Gerry Fahey - launched their campaign, which they say is not against the principle of same-sex marriage.

They are concerned about what effects a Yes vote would have on the Constitution - and ultimately how this might play out in family law cases.

In response, they proposed to insert language from the UN Convention on the Rights of the Child into the Constitution, that the State “shall respect the right of the child who is separated from one or both of its biological parents to maintain personal relations and direct contact with both parents”.

In a press conference on Tuesday, Mr Waters said a lack of opposition to their concerns was a silent acknowledgement of their value.

“We waited with bated breath for politicians or lawyers to come forth and contradict us. Nobody has done so,” he said, viewing this as a de facto confirmation of “something deeply worrying” about the proposed amendment.

Of their proposed addition, he said: “Only a total crank could object to the idea that you would put into the Constitution a protection which would guarantee to protect the right of a child and a parent to have a relationship through their lives.

“It is the one right that the Government does not apparently want to extend to children which is the most fundamental right of all.”

Mr Waters said he was confident the No side could prevail and that the nation’s division was moving swiftly toward a 50:50 split.

“I believe the Yes vote is in freefall at the moment and will continue to be in freefall until Friday,” he said.

Ms Sinnott appealed to the youth vote to give serious consideration to their choice.

“Maybe [to] put it in a language that they are much better at than I am: this is not a software change and it’s not even a hardware change - this is a complete change of operating system,” she said of the amendment.

“They have to take on board that this is their future. They are going to be these parents and families as this develops in the family courts.

“They are going to be the ones that are going to bear the first wave of heartbreak in this. And I would just appeal to them that they look more deeply than maybe their social media page into what the No vote is about.”

Mr Waters also used the occasion to criticise former president Mary McAleese on her decision to publicly support the Yes side.

“In the future now we will have to ask each [presidential] candidate not just what you will do when you are president but what do you propose to do when you are no longer president; when you have the status and the clout of this office for the rest of your life.”

He also said the ruling of discrimination in the Ashers Bakery case was “indicative” of where society is headed.