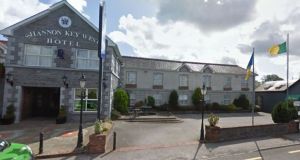 Gardaí are examining the scene of a fire at a former hotel that had been due to open as an accommodation centre for asylum seekers.

The Shannon Key West hotel in Rooskey on the Leitrim/Roscommon border had been due to open as an accommodation centre for 80 people.

Dozens of shocked local people gathered close to the scene on Thursday night as word spread that fire crews were fighting the blaze.

There were unconfirmed reports that a window in the building had been broken and that the fire had been started deliberately in the reception area.

The former hotel is one of three planned new new direct provision centres due to be opened by the Reception and Integration Agency. It has room for approximately 80 residents. One of the other planned new centres, the Caiseal Mara Hotel, in Moville, Co Donegal, was severely damaged in a fire in November. It had a capacity of 100, w hile the other new centre in the Grand Hotel, Wicklow town also has an estimated capacity 100. Five of the 38 direct provision centres dotted around Ireland are oversubscribed with residents, while the majority of other centres are close to capacity, The Irish Times reported in December.

The cathaoirleach of Leitrim County Council, Sean McGowan (Fianna Fáil) who was at the scene said local people were very upset at what happened.

“Obviously I am very disappointed and saddened,” said the local councillor. “This will not help anyone. Rooskey people are very good and decent people and will be very upset at something like this.”

The alarm was raised at about 7.45pm. Gardaí from Carrick-on-Shannon Garda station and a number of fire tenders went to the scene, and sealed off the area around the hotel. There were no reports of injuries, and witnesses said there was little obvious damage apart from smoke damage to the outside of the building. However, there were reports that the reception and the bar area were badly damaged.

The 39-room hotel near the border between Cos Leitrim and Roscommon, is the subject of proceedings between Paradub Ltd, which wants to develop it as tourist hotel, and businessman James Kiernan, the owner of the property.

The hotel closed in 2011 and Paradub claims it entered in 2016 into an agreement to buy the hotel for €600,000 from Mr Kiernan, of Glenart Avenue Blackrock, Co Dublin, which he had failed to complete.

Paradub initiated High Court proceedings in 2017 after it discovered from local media reports a plan had been put in place to use the property to house asylum seekers.

When the case returned before the High Court last November, it heard that plans had been put in place, under a third party agreement with the Department of Justice, for the hotel to be used as accommodation for asylum seekers from the start of this week.

A number of local people and politicians had complained in recent weeks about a lack of public consultation surrounding the reception centre plans.

Cllr McGowan said people would be very upset if it emerged that the fire had been started deliberately. He said he had already publicly stated that he believed the building should be maintained as a hotel.

“I was always on the side of a hotel as the village has suffered greatly. The local development association had a renewal plan and the hotel was central to that,” he said.