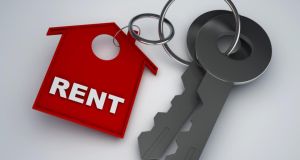 While two-thirds of Dubliners are anticipating rent increases in the next 12 months, just under one-third (29 per cent) of renters in the rest of the State expect their rent to rise.

More than one in three Dubliners in private rented accommodation fear they are going to lose their homes, according to a survey by the National Association of Building Co-operatives (Nabco).

The survey of 1,000 people found that housing pressures had increased for tenants in all parts of the country, but that the situation was worst in Dublin. Nationally, 23 per cent of those surveyed said they feared losing their rental accommodation, compared with 38 per cent in Dublin.

While two-thirds of Dubliners are anticipating rent increases in the next 12 months, just under one-third (29 per cent) of renters in the rest of the State expect their rent to rise.

Despite facing the highest private rents and expressing the most concern about their rental future, Dubliners were less than half as likely as tenants in the rest of the country to apply for social housing. Only 5 per cent of Dubliners have placed their names on a local authority social housing waiting list; the figure in the rest of Ireland is 11 per cent.

Nationally, tenants were spending an average of 30 per cent of income on accommodation. People on incomes of less than €20,000 spent 34 per cent on rent, while the over-55s spent 36 per cent. Dubliners in general spent 35 per cent of their monthly income on housing.

Overcrowded accommodation also emerged as an issue. More than one in eight people surveyed said there was someone in their household who wanted to move.

Nabco chief executive Kieron Brennan said the figures showed tenants were spending an unsustainable portion of their income on rent.

“This survey is the first of its kind in Ireland, looking beyond the price of housing to try to explore the experiences of people in their homes. We’ve found ample evidence to show the full scale and extent of the housing crisis in Ireland and its impact on families,” he said.

“This research provides a compelling case for greatly increasing the supply of housing in every segment of the housing market, in the Dublin region especially.”