Despite promises of expansion, the sad reality has been cuts in elderly care 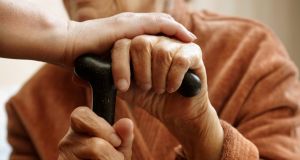 Could the fact that spending on services for older people is being cut have something to do with the level of complaints received in relation to those services? Photograph: John Stillwell/PA Wire

Tighter regulation of home help and homecare services for older people was promised in the programme for government but has yet to be delivered. But this is only one of a number of commitments in the document affecting older people that have been broken, or have not yet been fulfilled.

Instead, there were cuts last year in the number of home help hours and homecare packages. At one point, it looked as though almost one million home help hours would be cut from a total of 10 million hours, but according to the HSE Service Plan published earlier this year, the actual reduction was about 200,000 hours.

Meanwhile, the number of beds receiving a subvention is being cut and normal entry to the Fair Deal scheme providing nursing home care for older people was recently paused for a number of weeks in order to clear overcrowding in hospital wards.

Could the fact that spending on services for older people is being cut have something to do with the level of complaints received in relation to those services?

Cutbacks
Perhaps we shouldn’t be surprised older people are not immune to the cutbacks affecting society generally. It’s also true that the core social welfare payment to this group has been ringfenced against cuts, unlike other benefits from the State.

But it’s also true that older people have borne the brunt of cuts in the health sector. The allocation for older people in this year’s HSE Service Plan is down 2.6 per cent, the biggest reduction of any one sector.

Related areas have also been badly affected; spending on palliative care is down 1.6 per cent, for example.

Under pressure from the troika over health costs, the Government has decided that politically sensitive frontline services are to be protected at all costs.

That means a disproportionately large budget cut for older people services. Many of these are provided by voluntary or third-party groups, which are easier to cut anyway.

The cutbacks haven’t been confined to the health area either; witness the drastic reduction in grants from the Department of the Environment to help people who develop disabilities to adapt their homes.

Does less money translate into lower standards and/or more complaints? It’s an impossible question to answer, but the suspicion must be that budgetary cutbacks are impacting on the quantity and, in some cases, the quality of care being provided.

This is certainly the anecdotal evidence from many of those involved in the sector, who talk about having their hours and the amount of time they spend with clients cut.

Aside from the fact that less money is available, a second dynamic has impacted on the provision of home-based services for older people in recent years. While the number of home helps has dropped by 5,000 in five years, most of them employed by voluntary groups or the HSE, a growing number of private operators have entered the sector.

Whatever the arguments and counter-arguments, no one in the sector is regulated or is likely to be regulated for some time.