Surviving family say units less than one metre apart, having been 20m away

Its been six months since the Carrickmines tragedy where ten people including five children under ten died. Since the tragedy the surviving family members are still struggling to find permanent accommodation. 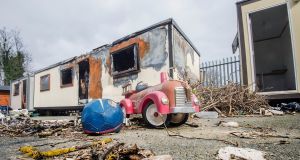 Dún Laoghaire-Rathdown County Council has confirmed that it moved units on the Carrickmines temporary halting site where 10 people died in a fire on October 10th, 2015.

Relatives of the people who died say they were placed dangerously close together.

The fire at the site on Glenamuck Road started in one unit and spread rapidly to another.

One of the deceased, Mary Connors (five months), was rescued by her uncle, John Connors (15) from the unit where the fire began and placed in bed in an adjacent unit. The second unit then caught fire and despite being rescued again by Dublin Fire Brigade, Mary later died of smoke inhalation.

Asked about the family’s concerns, a council spokeswoman said the fire and deaths were being investigated by the coroner, the fire brigade and the Garda Síochána. “All parties have an obligation to await the results of this statutory process.”

However, in a written answer to Sinn Féin councillor Chris Curran, the local authority confirmed it moved the units. Mr Curran asked why the units had been moved “into the configuration found at the time of the Carrickmines fire disaster”.

Senior executive officer Ann Hegarty said: “Extensive upgrade works including civil works, ground works, services and a total re-wire of the electricity supply on the entire site were carried out in March/April 2015. Some of the units were moved as part of these works.” Department of the Environment guidelines on residential caravan parks say: “Generally, there should be a minimum separation distance of 6 metres between caravans”, though this can be reduced if a suitable screen wall is in place between units. These guidelines apply to permanent sites and are not mandatory for temporary sites.

Mr Curran said the council had taken on a “duty of care” to those living on the site, given that they paid rent to the council and that it also provided services.