Citizen Schmidt: Ireland rugby coach now one of our own 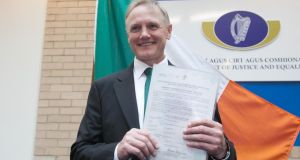 Three “warriors” of Irish rugby became the country’s newest citizens at a ceremony held in Dublin on Wednesday - among them Ireland rugby manager Joe Schmidt.

Appropriately dressed in a sharp suit and green tie, the rugby manager, a New Zealander, repeated the declaration, taken by more than 85,000 new Irish citizens in the past four years, voicing his “fidelity to the Irish nation” and “loyalty to the State” (although Irish rugby fans would say this was never in doubt).

His first action as a new citizen was to shake hands with his colleagues and fellow new Irish citizens, Australian-born Olly Hodges of the IRFU and South African-born player Richardt Strauss.

The next was to accept the congratulations of Minister for Justice Frances Fitzgerald, who welcomed the three men as citizens who “have already contributed to Ireland’s sense of itself”.

“Our national DNA, our sporting culture and our understanding of our place in the world are enriched by the strands of knowledge, culture and history coming from New Zealand, South Africa and Australia,” she said.

“You are welcome to be part of us and we rely on you to help us be the best of us.”

As with other such ceremonies, the formalities were observed: a flag party, led by Capt Cillian McHugh, Sgt Sid Reagan and Sgt Jason Crowley, brought the Tricolour on parade, and the Garda band played the national anthem.

Retired High Court Judge Bryan McMahon, who presided over Wednesday’s ceremony, reminded the trio that, in becoming Irish citizens, they were not required to forget their respective traditions.

“Bring with you your songs, your music, your stories,” he encouraged them “and above all, your rugby skills.”

He wished them well ahead of Ireland’s participation in the upcoming Rugby World Cup, describing them as “three warriors” being sent out by the nation with the Tricolour and green jersey.

Afterwards, Schmidt said both he and his children felt “a bit Irish anyway”, but added that Wednesday’s ceremony brought him “closer in that connection”.