Children should not grow up in direct provision, says Logan 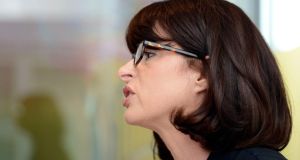 Ombudsman for children Emily Logan has said the treatment of children living in direct provision centres for asylum seekers is an issue of ongoing concern which the State urgently needs to address.

Speaking at the launch of her final annual report, Ms Logan said it was wrong children in many cases were spending their lives growing up in a system of often inappropriate accommodation intended as a short-term solution.

Ms Logan is due to shortly leave her post after a decade to become chief commissioner of the Irish Human Rights and Equality Commission.

While this period has seen real progress in how children and families are treated by the State, she said many challenges remained in areas such as asylum, child protection and access to disability services.

On the issue of direct provision, Ms Logan expressed concern that children were spending years in the system and often sharing bathrooms with strangers.

“It’s an area that we need to be more sympathetic towards. It’s difficult in the context of our constricted financial situation where our own citizens are struggling and housing has become such a big issue, not just for the traditional cohort homeless, but for a new group of people...

“It’s important that we don’t pitch one group against the other. We should have humanity across the system. I think it’s possible to do this. It’s about the political choices we make.”

In all, more than 1,600 children reside in direct provision, a system of former hotels, hostels and other short-term accommodation.

Asylum seekers spend an average of four years in these settings, often sharing single hotel rooms with their families.

Ms Logan said her office was specifically excluded from investigating issues relating to asylum and the direct provision system.

But she was able to use her powers to investigate issues such as education and healthcare for children who are also asylum seekers.

She added the Department of Justice had not accepted that the ombudsman’s office can address these types of cases within the statutory complaints-handling framework of the Ombudsman for Children Act.

In an investigation into the social work service in North Lee in Cork, she found safe social work practice was not possible in due to the size of caseloads facing individual social workers.

While authorities have moved to address these problems, she was concerned at continued resource shortages across much of the sector.

She said the new Child and Family Agency - which is now responsible for child protection services - had started out on a very difficult financial footing.

“This isn’t a 2013 problem. It’s an issue which has been with us. Social workers don’t have as strong as voice as they might... it’s still not resolved and they have a tough time in terms of complexity of cases they deal with and the emotional load of it,” she said.

Ms Logan also called on the Oireachtas to consider giving the next Ombudsman for Children a role in the planned new Independent Policing Authority.

Her office recently investigated the controversial handling by the Garda and social services of two cases involving Roma children who were taken into the care system.

She said: “Looking forward I believe the orientation of law and policy in Ireland must be towards full respect for the rights enumerated in the UN Convention on the Rights of the Child.

“I believe that Ireland continues to require a dedicated, expert and independent oversight of civil and public administration in this area and I believe that the authority of the next Ombudsman for Children should be extended to include a role on the new Independent Policing Authority.”

In all, the Ombudsman has dealt with 10,000 complaints from children and families since the office was established a decade ago.

The latest annual report, show that 1,677 complaints were dealt with by the office last year, an increase of 16 per cent.

The vast majority of complainants were parents contacting the Ombudsman on behalf of their children.

Education and family support, care and protection were the two main categories of complaint.