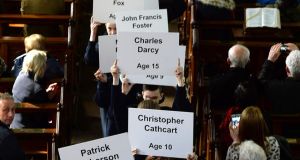 Students from Dublin City Quay primary school take part in a commemoration for the 40 children killed in the 1916 rising. Photograph: Cyril Byrne

Dublin voices commemorated the Dublin dead yesterday, as 40 children from the City Quay Primary School each held up a sign with the name of a child killed in the Easter Rising of 1916.

The dead children are, as Minister for Children and Youth Affairs Frances Fitzgerald put it in her speech, “still missing from the pages of 1916”.

Families of 15 of the dead children gathered at the Church of the Immaculate Heart of Mary in City Quay yesterday, under statues properly shrouded in Lenten purple.

“He got shot! He got shot!” said the children when asked at the remembrance service about what happened to their 1916 equivalents.

While she didn’t know what had happened to him, she pointed out that she is friendly with a boy her own age called O’Toole.

Like a lot of the children in the south inner city school, Kirsten lives in the Markievicz flats, named after the Countess Constance Markievicz, who took part in the insurrection.

Broadcaster Joe Duffy, the guiding hand behind the service, says its purpose is “just to remember and reclaim”. Duffy spent his spare time in the last year trawling records and has documented the deaths of 40 people under 17 among the 374 civilians who were killed during the Easter Rising.

It was all about the names at the City Quay church in Dublin yesterday. The ecumenical service was celebrated not just by the Rev Pearse Walsh, parish priest of City Quay, who described his participation in the event as “ a delight” , but also by Canon Barbara Fryday, relative of Neville Fryday (16) who was killed wearing his Canadian army uniform on Easter Monday 1916; and by Fr Michael Scott Patrick Fetherston, the nephew of Water Scott (8), who was killed in East Wall.

Canon Fryday said the same thing about her in-laws’ silence on the death of young Neville.

Pauline Braemor’s sister, Christina Caffrey, died last year without knowing she was the namesake of their relative Christina Caffrey (2) who was the youngest fatality of the Rising. Pauline did one of the readings at yesterday’s service . Her family hadn’t talked about their dead relative either. “We didn’t know nothing until Joe [Duffy] had the names in the paper. Then my brother went here, there and everywhere finding out about it,” said Pauline.

During the service, Declan O’Rourke sang Children of ’16 , which he had written for the occasion.

As one of their teachers, Ruth Horan, recited Yeats’s The Stolen Child , the children of City Quay school recited the chorus, which ends, “For the world’s more full of weeping than you can understand.”

Then they went back to class and the adults, including Minister for State at the Department of Health Alex White, went for tea and biscuits, while Canon Fryday went to her car to make sure that it was not clamped.