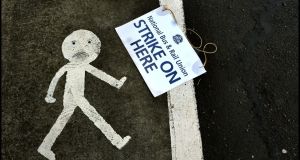 In the final quarter of last year, not one working day was lost anywhere across the Irish economy as a result of an industrial dispute.

The general narrative of many commentators in recent times has been that despite widespread job losses and a significant scaling back in the terms and conditions of employment since the recession, workers could simply not afford to go on strike.

However, that situation is coming to an end and the potential exists for a summer of industrial action across fronts both in the public and private sectors.

This weekend, about 1,000 members of the National Bus and Rail Union gave the lie to the notion there was no appetite among workers for strikes as they placed pickets on Bus Éireann depots.


Labour Court
This strike is in protest at moves by the State-owned Bus Éireann to implement a Labour Court recommendation, which the union members have rejected, to generate savings of €5 million at the loss-making company.

The Labour Court recommendation would involve cuts to premium and overtime rates, as well as cuts to annual leave and an extended working day for some staff. The company has argued “core pay” would be protected as would employment levels.

The union has maintained its members could face cuts in earnings of more than €3,000 per year.

Already the union has warned that if the dispute continues for several days, the possibility exists that it could spill over to Dublin Bus and Irish Rail, the other companies in the broader CIÉ group.

Siptu president Jack O’Connor said his members were likely to vote for strike action when its ballot at the company was counted later this week. He maintained working people were fed up with austerity.

The Government insists Bus Éireann has lost €27 million over recent years, that this situation cannot continue and the viability of the company is at stake.

The bus and rail union, for its part, maintains the cuts are linked to the Government’s stated plan to implement cuts to earnings across the public service if there was no negotiated deal with unions by today.

Bus Éireann is a commercial State company and its staff are not covered by either the first Croke Park deal or its proposed successor.

Last night there were reports of potential breakthroughs at the Labour Relations Commission on a negotiated solution to the Government’s plan to reduce the public service pay and pensions bill by €300 million this year.

However, this would still have to be voted on and it remains to be seen whether deals can be reached with all public servants to avoid, for example, the prospect for industrial action in schools, hospitals and elsewhere.

LRC chief executive Kieran Mulvey will report to the Government today on whether he believes a deal is possible. If it is not, Minister for Public Expenditure and Reform Brendan Howlin will bring recommendations to Cabinet tomorrow.

This could involve the Government reaching agreement on pay bill savings with unions that accepted the proposed Croke Park II deal and implementing unilateral pay cuts, freezes in increments and changes in rosters, premium payments and overtime rates for those that rejected it.

Already teaching unions are balloting for industrial action – although not until September at the earliest.


Uncertainty
In the private sector, a Supreme Court ruling last week that found registered employment agreements, governing terms and conditions for 80,000 workers in sectors such as construction and electrical contractors, unconstitutional has also generated uncertainty.

The move in effect left to the market to determine pay for staff in these sectors.