Heated nature of debate evident in submissions to Garret FitzGerald 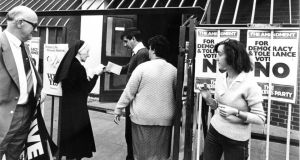 A leading figure in the Pro-Life Amendment Campaign (PLAC) told the government in secret talks in 1983 that it was willing to drop its demand that “the right to life of the unborn” be enshrined in the Constitution if another wording prohibiting an abortion law was agreed.

The compromise offer was made in March 1983, a month after the new Fine Gael-Labour government had announced it was redrafting the proposed amendment due to legal concerns raised about its implications by attorney general Peter Sutherland.

However, the government’s redrafted wording was defeated in the Dáil and it was the original wording drafted by the previous Fianna Fáil government in 1982 that was put to the people on September 7th, 1983.

Department of the Taoiseach files marked “confidential”, released today, record that Brendan Shortall, PLAC public relations officer, met officials in February and March 1983 for “informal” and “off the record” discussions.

While insisting the government honour its pre-election promise to hold a referendum, he said it was likely the campaign “would have to consider their own alternative wording to take into account” the legal concerns that had been raised.


‘Negative formula’
A memo dated March 14th notes: “Mr Shortall said that the campaign . . . appreciated some difficulty with the wording, and he thought that they would accept a somewhat negative formula provided that both the Courts and the Oireachtas were restricted from liberalising abortion in the future.”

The campaign proposed a wording that asserted the right to life of the unborn, with an added paragraph stating “no law shall be enacted to the effect of which would be to make lawful any act done with the intention of procuring a miscarriage”.

The memo continues that Mr Shortall phoned the department later that afternoon “to convey his personal [underlined] view that, if the first sentence ‘The State recognises the right to life of the unborn’ was a major obstacle, he thought that it could be omitted provided that the second paragraph . . . was included; he could not, of course, commit PLAC in anyway to this, but he would use his personal influence towards acceptance.”


Medical uncertainty
Documents show the AG’s office considered this proposal but advised that inserting a prohibition on “unlawful miscarriage” in the constitution would create legal and medical uncertainty and almost certainly lead to further troublesome amendments.

In his advice to the government, Mr Sutherland stated bluntly: “The requirements of the Pro-Life lobby relating to the legislature and the Courts cannot be complied with by any formula of words” because the campaign was making contradictory demands, and failed “to recognise the difference between motive and intent” in a medical termination.

The declassified papers contain a huge volume of submissions to then taoiseach Garret FitzGerald both for and against the amendment, including from a Galway obstetrician who complained that the referendum was “almost like a vote of ‘no confidence’ in the practice of obstetrics”.

In a somewhat prophetic letter in May 1983, Dr Fergus Meehan warned that if the amendment was passed a pregnant woman undergoing life-threatening complications might die in hospital because a doctor “would rather wait until the foetal heart has disappeared”.

Dr Meehan, who described himself as both Catholic and anti-abortion, wrote that he had discussed the matter with his bishop and felt he could no longer remain silent on the matter. Thus, he was forming a lobby group of doctors against the amendment and requested a meeting with the taoiseach.

A private memo prepared for Dr FitzGerald noted that the department of justice had recommend he meet Dr Meehan, adding: “On balance, there is merit in seeing Dr Meehan (and presumably members of his group) if it is desired to give official ‘recognition’ to their views.”


Political pressure
Dr FitzGerald, who was already under political pressure over his perceived sympathy for liberal campaigners, decided against the meeting, however, and wrote an encouraging letter in response instead.

In contrast, PLAC and its supporters were granted numerous audiences, and the government’s eagerness to keep them on side was evident from a letter in February 1983 to the Bishop of Clonfert Joseph Cassidy, in which the taoiseach enclosed six copies of the attorney general’s opinion on the draft amendment.

He also included Mr Sutherland’s telephone number and extension “should you feel that it might be of assistance to discuss any aspects of the matter further with him”.

The heated nature of the debate was evident from a letter from a woman from Kanturk, Co Cork, containing a petition signed by dozens of adults and children. Addressed to Dr FitzGerald, it read: “We say here that Dick Spring and Peter Sutherland talk and think like Protestants. There are no Protestants at all in Kanturk. You are not one either are you? So do not let them or anyone KILL our babies . . .”

Forget Black Friday, welcome to Green Friday - 21 Irish retailers with great deals 13:39
Court proposes to overturn permission for apartment development in Howth 13:35
Covid-19: Level 5 restrictions ‘should stay until each county has zero cases’ 13:19
Hotel restaurants, golf and tennis all in line for reopening but Government to warn ‘every contact counts’ 13:18
Dissident republican jailed for 22 years for prison officer’s murder 13:11

1 Hotel restaurants, golf and tennis all in line for reopening but Government to warn ‘every contact counts’
2 Exiting Level 5: What will reopen, when will it happen and when will we know?
3 Businesses can show ‘Dunkirk spirit’ by taking new direct ferry to France
4 Coronavirus search: How is Covid-19 spreading in your locality?
5 Miriam Lord: Helen McEntee holds up well for someone with barely a leg to stand on
Real news has value SUBSCRIBE