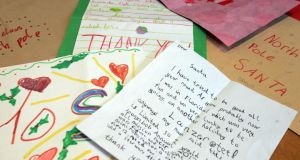 Some of the Santa letters from all over Ireland at the GPO in Dublin before being forwarded to the North Pole. Photograph: Eric Luke/The Irish Times 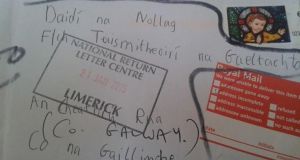 An Post has apologised after a three-year-old Dublin girl’s letter to Santa Claus was returned to her home.

He said the address on the envelope, which was written in his wife’s handwriting, was marked Santa Claus, Santa’s Grotto, Lapland, The North Pole.

“We were horrified to get a letter like that back. My eight-year-old daughter found the letter at the end of the stairs when she came down and was quite concerned as to why her little sister’s letter hadn’t made it to its destination.”

Mr Campbell said he was glad he brought his daughters to meet Santa in Dundrum before Christmas where they told him what gifts they wanted.

An Post said it was “very upset” to learn of the case and that “it simply should not have happened”.

It received nearly 140,000 letters to Santa over Christmas and sent them on to the North Pole and helped Santa get letters back to the children.

“An Post takes its role in helping Santa Claus reply to children’s letters very seriously, and has done so for almost 30 years,” it said in a statement.

An investigation began into the returned Santa letter after An Post spotted a picture of the letter on Mr Campbell’s Twitter account. The company said it contacted the family straightaway on Twitter and then by telephone.

“We apologised totally for what had happened and offered to do whatever we could to make good the damage done to his daughter’s faith in Santa and Santa letters.”

An Post said it offered to arrange for Santa to send a “very special letter” to Mr Campbell’s daughter which would include details of the gifts the three-year-old had received at Christmas.

Separately, a second Santa letter, sent by a young boy in Dublin on November 30th, took nearly two months to arrive at its destination in Connemara.

The letter, which was addressed in Irish to Tuismitheoirí na Gaeltachta (Parents of the Gaeltacht) in Connemara, ended up in a UK Royal Mail sorting office before making it’s way back to Limerick and finally arriving at its destination in Carraroe last week.

Before Christmas Tuismitheoirí na Gaeltachta called on Irish speaking children to send their Santa letters to it and promised they would receive a personal response from “the big man”.

Last Thursday the parents’ group posted a picture on its Facebook page of a Santa letter stamped by both the National Return Letter Centre in Limerick and the Royal Mail.

An Post told Tuairisc.ie that the fact the letter was addressed in Irish had nothing to do with its long journey and that it accepted the blame.

“An Post does not understand how the letter ended up in the UK. However, this is not a question of language. This could have happened even if ‘Main Street, Gort, Co Galway’ was written on the envelope.”

The group has arranged for a personal letter to be sent to the young boy in Dublin from Santa and also plans to send a collection of gifts to the boy.

0:41 People should keep record of who they meet over weekend to help contact tracers

Wild salmon in two rivers reported to have symptoms of red skin disease 19:48
People should keep record of who they meet over weekend to help contact tracers 20:07
Galway shuts down popular tourist spots and beaches over Covid-19 concerns 18:49
Taoiseach has confirmed schools will reopen at the end of August 18:38
Private hospitals ‘takeover’ by State will not be extended past June 18:32