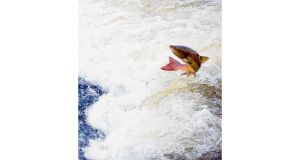 ANGLILNG NOTES:A 1 per cent reduction in salmon returning to their native rivers because of sea lice mortality may be the crucial tipping point between having an open or closed fishery, according to Inland Fisheries Ireland (IFI) following a Marine Institute publication, which notes that sea lice emanating from aquaculture facilities can cause mortality in wild Atlantic salmon.

To put this in context, if 3,000 salmon return to a river and this represents a 5 per cent return rate, a further reduction of one per cent means that 600 fewer adult fish return. This, says IFI, has the potential to curtail commercial or recreational salmon fisheries and impact on river conservation limits.

If wild salmon stocks are not to be adversely impacted, the location of salmon farms in relation to salmon rivers also comes under scrutiny in the publication, as does the critical importance of sea lice control prior to and during migration.

Development of resistance to chemical treatment of sea lice and other fish husbandry problems, such as pancreas disease and amoebic gill disease, are likely to make sea lice control even more difficult in future years, the study deduces.

As one of the world’s largest producers of farmed salmon, Norway is seriously concerned about the impact of sea lice arising from aquaculture facilities on wild salmon stocks and the issue of escaped farmed salmon.

In its strategy portfolio, the Norwegian authorities point out that if delousing in fish farming fails to yield the desired effect on lice figures for wild fish, it may be necessary to consider a reduction in the biomass of farming facilities in the worst-affected areas.

On the issue of escaped farm salmon, they say “scientific comparisons of wild and farmed salmon, and their cross-breeds, has shown that gene transfer from farmed to wild salmon can reduce the latter’s ability to survive”. The IFI is keen to echo these views from an Irish perspective.

Inland Fisheries Ireland is supportive of the development of a sustainable aquaculture industry and welcomes all advances in research that will underpin the sustainability of this industry and safeguard wild salmon and sea trout stocks into the future.

Due to “horrible” weather, with rain, sleet and strong winds, angling pressure was at a minimum last week on the Drowes River and Lough Melvin in the northern region, resulting in no reports of any salmon caught.

The Loughs Agency is pleased to offer small grants through its Sustainable Development Fund. The Agency is offering funding support for the development of marine tourism and/or angling in the Foyle or Carlingford areas.

Information sessions will be held this evening at 7.30 pm in Bagenals Castle in Newry and Wednesday at Loughs Agency Headquarters, Victoria Road, Derry. Application forms are available at loughs-agency.org/about-us/grants/

Information provided by returns is an important part of the monitoring programme towards conservation of fish stocks. So far only 19 per cent of anglers have made returns.

Bring the children and learn all about fishing at the Angling Expo this Saturday and Sunday at the National Show Centre, Swords, Co Dublin.

At the Dublin Angling Initiative (DAI) Kids’ Zone, many of Ireland’s most experienced anglers will be giving freely of their time, knowledge and expertise.

The Sealife Centre in Bray will be there and following last year’s success, Woodland Falconry will have great birds of prey on display. Try casting at the rod clinic and take part in free games with prizes.