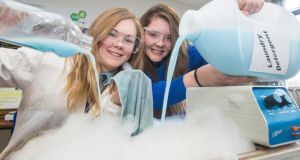 Kaylan Barrowman and Aoife Bolster from St Mary’s College, Derry, will present their findings on the possible antibiotic effects of laundry detergents.

Could your laundry be making you ill? Three students from St Mary’s College, Derry, want to find out and they will have a story to tell next week when the 50th BT Young Scientist and Technology Exhibition gets under way at the RDS.

Kaylan Barrowman, Aoife Bolster and Rochelle Morrison want to find out if washing underwear thrown in with tea towels later used to dry dishes might be causing E.coli infections. It all has to do with energy conservation, they say, but bacterially contaminated laundry might be the result.

More people are doing laundry at low temperatures of 30 degrees and below, they explain. This is not hot enough to kill bacteria, so only your laundry detergent stands between you and surviving bacteria.

“This project investigates the possible antibacterial action of a range of laundry detergents including those that claim to kill bacteria and those that do not make that claim,” they explain. Given that underwear may carry E.coli, their detergents are tested against this bacterial species and the results should either frighten or reassure us all.

There will be 550 student projects on display over the course of the four-day exhibition which opens next Wednesday. It typically attracts up to 40,000 visitors and interest in the exhibition will be even greater this year given it is celebrating its 50th anniversary.

New trophy
To mark the anniversary, lead sponsor BT will present a new perpetual trophy to the 2014 Young Scientist, with the design selected after a cross-Border competition.

The design by Jowita Rogalska from the Southern Regional College in Lurgan won the day against 86 other competitors and it will grace the stage next Friday when the award is announced. Her design will be presented to the winners of the BT Young Scientist and Technology Exhibition from 2014 to 2016.

All of the projects on display have involved hard work and research from the students involved, but some may also have commercial potential. An example is the “Moo Boot” developed by Stephen Woods, Conor Ryan and Stephen Lynch from Bush Post Primary School on the Cooley Peninsula, Co Louth.

They designed and tested a special protective boot which can be used to help heal bacterial infections that cause foot rot in cattle. An infected foot causes pain and under performance in livestock, they say, and this produces unwanted costs for the farmer.

The boot can be used to protect the foot and speed healing. “We are very excited and a little nervous about displaying our product to the judges and the public at this year’s BT Young Scientist and Technology Exhibition,” they admit. But they might bring some cheer to farmers struggling to deal with these infections.

Potential
Stephen O’Connell of Mary Immaculate Secondary School, Lisdoonvarna, Co Clare, has come up with another good idea with commercial potential. He is trying to develop a way to help crab fishermen to identify only the very best crabs for harvest.

He has considerable experience with these crustaceans given his father and uncle are commercial crab fishermen. This is the third time that the student, who is now in fourth year, has entered the exhibition and previous outings included research into lobsters and brown crabs.

He believes it may be possible to use the colour on the underside of the crab shell as a way to predict the quality and quantity of the meat in crab claws. The fishermen may be throwing back apparently inferior crabs that might in fact deliver plenty of meat and Stephen hopes to end this lost harvest.

Hugh Conlon of St Aidan’s Comprehensive School, Cavan, wants to help a different group of people – those trapped in crisis zones, such as after an earthquake or the displacement of the general population. It is all based on using Lego-like components to build cheap, waterproof shelters quickly and at a low cost, he explains.

Lego bricks are simple to use, so much so that even a small child can put them together to build a house. But what if the bricks were bigger and solid enough to build a shelter suitable for human habitation?

“I will be testing to see if a Lego house could be successfully reproduced on a larger scale,” he explains.

“I will be investigating the waterproofing, insulation and load-bearing capabilities of a Lego house.”

He hopes that the result will deliver a possible design for a component-based structure big enough to live in that can be assembled without tools.