‘Do gingers feel the cold more?’ ask the even younger scientists

David Kavanagh and Craig Curley investigate if the sex of a chicken can be determined by the shape of the egg. It's their entry to the 2014 BT Young Scientist Exhibition. 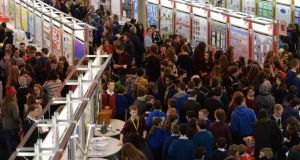 A packed hall at the 50th BT Young Scientist & Technology Exhibition at the RDS.Photograph: Alan Betson / The Irish Times

Tucked away in a room at the back of what has become the “Eco Zone” in the RDS is the Primary Science Fair. Running alongside the main Young Scientist Exhibition the fair sees pupils from 120 schools across the country exhibiting their class projects.

This isn’t a competition per se but there’s still a certain amount of pride on display. “We’re the best school ever,” remarked one young girl as she walked around the other exhibits.

As with their older counterparts in the main hall, there’s an array of different research projects here, with an emphasis on observation and inquisitiveness.

The children from Grange NS, Co Carlow, wanted to know whether hair colour had any effect on body temperature. Daniel Keogh explained how questionnaires were sent out to class mates asking questions such as “When in bed do you wear long or short pyjamas?” and “After break in school do you usually take off your jumper?” The class then charted the answers on a graph and “we found that more blond and ginger-haired people were taking their jumpers off after activity,” Keogh said.

Thermal questions also exercised the fifth class girls from St Clare’s NS Ard Mhuire, Cavan, who set out to discover “will a coat stop a snowman from melting”. In the absence of any decent snowfall this year, they lacked a proper model on which to try different items of clothings so instead they improvised with ice cubes. After testing various materials they found that a snowman looking to extend his life expectancy would be well advised to wear a paper coat.

Piper’s Hill Community NS in Naas, Co Kildare, meanwhile, discovered that the bee plays an important role in our eco system. Scoil Mhuire in Sandymount, Dublin, also had an apian-themed project. “What is the importance of the humble honey bee,” they asked. They answered the question with a helpful cartoon diagram of a bee mouthing the words: “If we die we’re taking you with us”.

Other schools focused on diet. Fourth class from Our Lady of Lourdes NS in Bunclody, Co Wexford, conducted research on the importance of fruit and vegetables in children’s diets. Josh Boyd from fifth class in Kill o’the Grange NS in Deansgrange Dublin asked this reporter whether he knew the daily recommended sugar allowance for an adult male (he didn’t).

It’s 60g for an Irish man and 48g for a woman, Boyd and his classmate Josh Drumm explained. But they said that’s still too high and the American standard is about half that amount. They explained that excess sugar in children’s diets can increase their risk of diabetes, high blood pressure and heart disease later in life.

They even had a petition on the go, trying to get visitors to support their campaign for clearer labelling on sugary products. They said the project has made them more careful now about what sort of food and drinks they consume. “I will check the label first and if the sugar balance is okay I will buy it,” said Boyd.