You can’t put a price on nature. Or can you?

It might sound sacrilegious, but placing a monetary value on nature might be the only way to protect scarce resources, a Dublin conference will hear next week 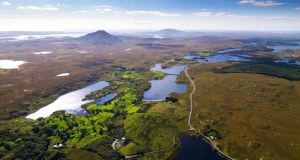 ‘If we don’t recognise wealth, we tend to lose it. For example, we might drain wetlands and lose the sponge effect, resulting in floods and huge compensation bills,’ says journalist Paddy Woodworth. Above: wetlands in Connemara. Photograph: Getty Images

The idea of putting a monetary value on our bogs, woodlands, parklands and the habitats and species therein was first given widespread attention when American ecologist Robert Costanza and 12 co-authors published their financial calculations for the world’s ecosystem services and natural capital.

That 1997 article in Nature estimated that the total value of 17 ecosystem services from more than 16 types of ecosystems or biomes was $33 trillion per year, a higher figure than the total of the world’s gross national products.

The paper was widely criticised at the time, but it did place the concept of natural capital firmly on the world map for ecologists, economists, politicians and policymakers. In 2008, the Department of the Environment put a price of €2.6 billion on our biodiversity in its report, The Economic and Social Aspects of Biodiversity: Benefits and Costs of Biodiversity in Ireland .

Next week in Dublin, a conference, Natural Capital: Ireland’s Hidden Wealth , will highlight national and international examples of the multiple types of ecosystem services provided by our planet.

Author and journalist Paddy Woodworth is one of the conference organisers. He believes that placing a monetary value on nature might be the only way to protect scarce resources that provide us with enormous services we completely take for granted.

“If we don’t recognise wealth, we tend to lose it. For example, we might drain wetlands and lose the sponge effect, resulting in floods and huge compensation bills for businesses and homeowners. Or, we might remove woodland from the edge of rivers to gain more land or access, and soil erosion [will] result in the loss of land instead,” he says.

“In economics, there is a good principle that you don’t spend your capital but live on the interest it provides. Our collective ecosystem is a complex piece of natural capital which is producing interest such as fertile soil, clean air and water, flood mitigation as well as aesthetic and spiritual pleasures.

“And there is hard scientific evidence now on how a healthy environment fosters healthy people,” says Woodworth.

One ecosystem service in Ireland whose economic value has been calculated is pollination. “We have calculated that there is a 30 per cent reduction in the yield of oil-seed rape without pollinators, principally bees,” says Dr Jane Stout, director of the Centre for Biodiversity Research at Trinity College Dublin. “The pollinators were valued at €4 million a year to the oil-seed rape crop.” Her research has also examined the impact of human activity on biodiversity and ecosystem services.

A new Woodlands of Ireland study estimates our native forests to be worth €100-€140 million when you include services such as carbon sequestration, domestic and international tourism.

James Aronson, a research scientist from the Centre d’Ecologie Fonctionelle et Evolutive in Montpellier, France, will speak at next week’s conference about restoring natural capital in places such as South Africa and Brazil. He argues that there are two types of natural capital.

“The first type is renewable natural capital – the living components of natural, near-natural and native biodiversity,” says Aronson. “And the second type is cultivated natural capital, which includes agriculture, tree plantations and fish farms and the plants and animals used for production. We throw away the natural capital from cultivated sources by ignoring traditional farming knowledge and the genetic resources of seed banks.”


‘Economic benefits’
Micheál O’Briain, the deputy head of the nature unit of DG Environment in the European Commission, will also speak at next week’s conference. “We now know that ecosystem services in the EU are worth €200-€300 billion per year, which is the total of all the economic benefits from the Natura 2000 networks across Europe,” he says. “The concept of natural capital is embedded in overall policy in the EU.”

O’Briain says that Ireland, like many other EU countries, has started to map and value its natural capital, but has a long way to go before it is fully evaluated. However, he is keen to point out how businesses are beginning to realise the value of incorporating natural capital into their accounting systems.

“The water companies in the UK realise that if you manage the catchment area around the water supply, there is a huge reduction in the chemicals required to purify the water. Unless other businesses realise that it makes economic sense to look after the ecological resources, it [natural capital] won’t be taken into account.”


Natural Capital: Ireland’s Hidden Wealth is on Monday and Tuesday, April 28 and 29 in the National Botanic Gardens, Glasnevin, Dublin. naturalcapitalireland.com

With its eye firmly on the protection of resources and the creation of economic value – skills, jobs and business opportunities – the EU Biodiversity Strategy to 2020 commits member states to mapping and assessing the state of ecosystem services by 2014. It further commits member states to integrating natural capital value into accounting and reporting systems at EU and national level by 2020.

One of the speakers at Natural Capital: Ireland’s Hidden Wealth next week is Rudolf de Groot, a Dutch ecologist who has worked for almost 30 years on the economic analysis of ecological services.

De Groot, co-author of the Costanza report (see main piece) and lead author of Millennium Ecosystem Assessment and The Economics of Ecosystems and Biodiversity , is a key international figure in putting monetary value on nature and integrating these values into national and international accounting systems.

“Natural capital is calculated through a group of costs that are measured using shadow pricing, which is an indirect market value,” explains Prof de Groot. These include regulatory services, the cost of functions such as carbon capture by forests, watershed protection, the prevention of soil erosion and pollination. Other, so-called avoidant costs, include the cost of clean-up following erosion if a forest is cut down . Hedonic pricing is the monetary equivalent of the aesthetic value we place on nature (consider how much higher a house price with a sea view is).

“The total value of shadow prices is two to three times higher than the market value, but some economists say there is a high margin of uncertainty. I argue that market values are uncertain too, and shadow pricing comes closer to the true benefit and is not influenced by market trends,” says de Groot. “We now know the value of nature, the next step is to turn that value into real money.”