William Reville: Fears about GM crops are not backed up by the facts

GM foods are widely misunderstood by the public. They offer advantages that we forgo at our peril 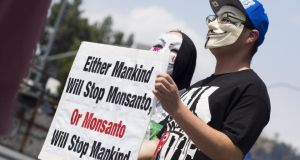 Nearly all corn and soybeans grown in the US are genetically modified. Above, activists take part in a march against US agrochemical giant Monsanto and GMO foods in Los Angeles. Photograph: Robyn Beck/AFP/Getty Images

The discovery of the molecular structure of the genetic material DNA in 1953 revolutionised understanding of the molecular basis of life. Many practical applications followed, including the development of genetically modified food in the 1990s. GM foods have always encountered widespread public resistance in Europe, largely because of perceived risks to human health and the environment. However, these fears reflect poor public understanding of the science behind GM foods. This new technology offers many advantages and is safe when properly controlled. Continued blanket opposition to GM foods risks throwing out the baby with the bath water as described on June 8th by Jane Brody, columnist with the New York Times.

A genetically modified organism is one whose DNA has been altered artificially by “genetic engineering” in order to confer a new desirable characteristic on the organism. Nearly all corn and soybeans grown in the US are genetically modified. Genetic engineering can transfer selected genes from one organism to another. For example, plants can be protected against insect pests by incorporating a gene for anti-pest toxin from a bacterium into the plant. This toxin, used in conventional agriculture, is safe for human consumption.

Of course, all food derived from plants is genetically modified, because farmers have been improving food plants for thousands of years by repeatedly crossing them with relatives having more desirable characteristics. It takes many years to produce a commercially viable crop this way, so plant breeders introduced new genetic manipulation tools to supplement conventional breeding well before the advent of GM foods, for example blasting plants with radiation or chemicals to cause genetic mutations and then picking promising new mutations.

In contrast to slow, imprecise traditional breeding methods, precise plant improvements can be achieved in one generation with genetic engineering. In this case a single gene, or small group of genes, is introduced into the plant, imparting specific desirable characteristics such as tolerance of salt, drought or frost, or resistance to disease.

To the layperson, transferring a gene from one species to another seems unnatural and dangerous. But biologically, such transfers are not that unnatural because all organisms share thousands of genes with other species; for example, humans share 84 per cent of our DNA with dogs. Genetically engineered crops are regulated by governments and cannot be released to farmers or consumers until they have passed rigorous safety assessment. On the other hand, new plants developed using less precise and more disruptive conventional breeding methods are released with no pre-market regulatory review.

We assume that plants produced by conventional breeding are safe to eat. However, if we used the same criteria to judge this matter as used to assess the safety of GM foods, we would worry about conventional food. More than 99 per cent (by weight) of the pesticides humans consume are chemicals that plants produce naturally to defend themselves against predators. These natural pesticides appear to be safe at the concentrations we ingest with our food, but few have been fully tested for human safety. About half those that have been tested were found, at higher concentrations, to cause cancer in rodents.

Comprehensive studies have consistently attested to the safety of genetic engineering technology. As long ago as 1987 the US National Academy of Sciences concluded that plants produced by genetic engineering techniques pose no new or different risks to human health or the environment than those produced using other breeding methods. Since then, the EU and a number of countries have reached the same conclusion.

GM crops offer many advantages that we forgo at our peril. For example, Asian governments have yet to approve insect-resistant higher-yield genetically modified rice (Golden Rice), engineered to deliver vitamin A (rice normally has no vitamin A), despite the fact that vitamin A deficiency kills more than a million people annually and irreversibly blinds half a million people.

The world’s population continues to balloon, and by 2050 the world will have to grow 70 per cent more food to keep up with that growth. The widespread adoption of genetic engineering technology will be essential to help achieve this goal.