Will over-consumption and inequality be our downfall?

According to a simple model called Handy, with parameters set to reflect our unequal society, ‘collapse is difficult to avoid’ 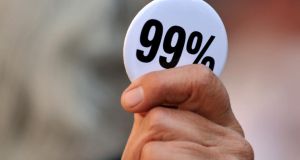 The cushion of wealth allows the rich to continue business as usual, ‘oblivious to the catastrophic trajectory’ that is taking society towards its doom. Above: an Occupy Wall Street protester

Our extravagant lifestyle is draining the Earth’s natural resources. Population is climbing and climate change looms ever larger. Is the collapse of society imminent?

Historical precedents are ominous. Many civilisations ended abruptly, with drastic population reductions and centuries of oblivion. The fall of the Roman, Han, Mayan and Gupta empires show that advanced civilisations can be fragile and impermanent. There are many causes, but over-consumption of resources and inequalities within society are primary.

A mathematical study of societal evolution has just appeared in the journal Ecological Economics, by University of Maryland researchers Safa Motesharrei and Eugenia Kalnay, and University of Minnesota’s Jorge Rivas, and part-funded by Nasa.

It is based on a simple model called Handy (human and nature dynamics). Handy is inspired by a classical model derived independently in the 1920s by two mathematicians, American Alfred Lotka and Italian Vito Volterra. Volterra was studying fish stocks in the Adriatic and noticed that different species varied periodically but out of phase, with sharks reaching their peak later than the fish on which they preyed. The Lotka-Volterra model comprises two equations, giving the rates at which predator and prey numbers change.

Populations are determined by natural birth and death rates and the availability of food. Think of rabbits and foxes. Rabbits breed quickly and their numbers increase rapidly. This means more food for foxes, which flourish, driving down the rabbit population and eventually leading to their own decline. The cycle repeats indefinitely.

The Lotka-Volterra model predicts only regular variations with constant periods and amplitudes. It cannot simulate population collapse; for this, a more advanced model is required. Unlike simple predator-prey models, Handy has an inherent capacity to simulate irreversible collapse. The model splits the population into rich and poor, with a separate equation for each. It also predicts natural resources and accumulated wealth, making for four coupled equations. Handy treats humans as “predators” while natural resources are the “prey”.

Accumulated wealth is available only to the rich: when famine strikes, they continue to consume unequally while the poor suffer. The mathematics simulate this economic stratification. When the population exceeds the carrying capacity – the level that natural resources can sustain – it is brought down again by famine, migration, disease, rebellion and war. For given input parameters, Handy can be used to find a sustainable equilibrium and maximum carrying capacity.

The authors of Handy consider three societies – egalitarian, equitable and unequal – depending on the inequality between rich and poor. In an equitable society, Handy shows that collapse can be prevented by reducing the consumption of natural resources. With parameters reflecting our unequal society, “collapse is difficult to avoid”. The cushion of wealth allows the rich to continue business as usual, “oblivious to the catastrophic trajectory” that is taking society towards its doom.

The model may also help us to determine policies needed to avert such an outcome and pave the way to a sustainable future. The two main factors leading to collapse are the stretching of resources and the economic stratification of society. “Collapse can be avoided and population can reach equilibrium if the per-capita rate of depletion of nature is reduced to a sustainable level, and if resources are distributed in a reasonably equitable fashion.” If.