When science becomes a laughing matter

Scientific endeavour is full of bizarre, wacky and hilarious experiments on such topics as banana skins, road-crossing chickens and laughing rodents 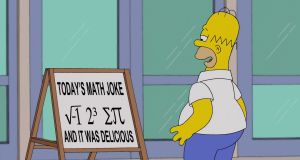 Why did the ex-chicken cross the road? It was fired from a cannon by a group of scientists who were trying to figure out how fast wind moves inside a tornado. This was calculated by waiting for the former chicken, which has ceased to be, to land before counting the number of feathers left.

This is one of the many pieces of scientific research to win a prize for being serious and funny at the same time. The Ig Nobel Prizes have been handed out by actual Nobel laureates every year at Harvard University since 1991. They are awarded to scientific research that “makes you laugh, then makes you think”.

The founder of the Ig Nobel Prizes, Marc Abrahams (who has a degree in applied maths), says science is full of bizarre, wacky and hilarious experiments; scientists often don’t realise this until Abrahams points it out and gives them a prize.

Previous winners have worked on all sorts: the 2014 Ig Nobel Prize for biology was given to Czech scientists who discovered that when dogs answer the call of nature, they tend to align their body with Earth’s north-south geomagnetic field. Perhaps the most fitting awardees were the Japanese researchers who worked out the amount of friction that occurs when someone steps on a banana skin.

Is this strictly a laugh among scientists or do the wider public actually find it funny or relevant? Dr Elisabeth Oberzaucher, from the University of Vienna, feels it kills two birds with one stone by humanising scientists and making science more relatable. Speaking at the recent EuroScience Open Forum 2016 in Manchester – the largest general science conference in Europe – she told the audience: “[Events like the Ig Nobels] are something we scientists can make use of to open up the ears of the community and explain things that might not otherwise engage people.

“We’re used to talking to peers and using technical language, so this lets people know we’re not taking ourselves overly seriously; we don’t think we’re God,” she says. Everyone should google “laughing rats” not just because they’re adorable but because scientists actually tickle these little creatures for research purposes, she adds. Dr Oberzaucher has won an Ig Nobel for research on whether it was possible for historical figure Moulay Ismael the Bloodthirsty, the Sharifian Emperor of Morocco, to have fathered, as legend has it, 888 children. It turns out he had the time (and energy) to produce 1,200.

Not everyone attends these kinds of events but science can and does find its way into every home. Just think of The Simpsons. This much-loved animated series has had massive cultural impact (who hasn’t uttered Homer’s “d’oh” or Nelson’s “haw haw”?) while sneaking in plenty of maths on the side.

British science writer Simon Singh has written a book all about this. The Simpsons and Their Mathematical Secrets delves into the many maths references inserted in the series over the past 26 years. This includes everything from jokes on Fermat’s last theorem to a freeze-frame gag displaying Euler’s identity, a famously simple, yet elegant, mathematical equation that shows up for a split second on the cover of one of Lisa’s books.

The heady combination of comedy and science has been growing in popularity over the past few years, most notably with the success of BBC Radio 4 programme The Infinite Monkey Cage, cohosted by famous physicist Prof Brian Cox and comedian Robin Ince. Episodes tackle meaty topics ranging from theoretical physics to artificial intelligence and panellists include leading experts in these areas and comedians who are game for learning something new while making listeners giggle.

“I’ve always described myself as being an idiot bridge,” says Ince, adding that he is not afraid to ask a scientist about something, no matter how silly it may seem. He says one of the greatest problems with communicating scientific information is that people often panic and shy away from science because they think they’ll look stupid. “I’ll ask an astrophysicist a question which may well turn out to be idiotic, but as long as the question comes from a good place of inquiry – from a genuine desire to understand – then the scientist doesn’t mind.”

The Infinite Monkey Cage, he says, tries to remove that fear of not being clever enough to understand and enjoy science.

Some experiments naturally encourage the curious. All you need to do is askAndre Geim, the first ever scientist to become both a Nobel and Ig Nobel prize winner. He is a Nobel Prize winner in physics for his work on the substance graphene but says he gets stopped at conferences far more often by people asking: “Aren’t you the guy with the levitating frogs?”

He is. Geim received an Ig Nobel in 2010 for his research on levitating a frog using magnets. He still gets mail from people asking if it’s possible to build a similar device to levitate themselves. It is possible, says Geim, but you would need a small nuclear station nearby. He also gets letters wondering if such a device would make much noise or whether a person would need to be naked for it to work.

SERIOUS INTENT: HOME-GROWN SCIENCE LAUGHS
The Irish comedy scene is also getting a giggle out of the life scientific. Comedian and TV personality Neil Delamere is suitably qualified: with a degree in computer applications from Dublin City University, he meets the geek criteria. Delamere is also the host of RTÉ science comedy panel show Eureka! The Big Bang Query.

Making science funny is not all about making fun of science using stereotypes of bumbling, socially awkward scientists dressed in white lab coats, however.

“I’ve never come across a scientist who resembles Sheldon [from The Big Bang Theory]. In fact, one of the things that these comedy panel shows, Ted talks and popular science podcasts do is let you in a bit more on the personality behind the research.” This is important, says Delamere, because it shows young people, who might not ordinarily consider a career in physics or biotechnology, that scientists are people just like them.

“You may well be reaching formative minds. The people who influence you culturally when you are 14 or 15 are the ones you tend to hold in high regard for the rest of your life.”

So, what’s so funny about science, then? “Great extremes are usually funny because they are easy to poke fun at, and science provides these extremes. It’s a rich hunting ground,” says Delamere. “Look at the Ig Nobel prize winners and that answers your question.”