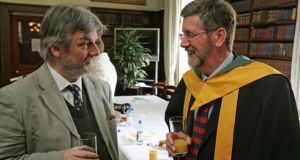 A research paper on a programme designed by Prof Des Higgins of UCD (left) is among the 10 most frequently cited research publications of all time according to the science journal Nature. He is pictured with Prof Tony Kavanaagh, professor of Plant Genetics at TCD. Photograph: Frank Miller/The Irish Times

A research paper on a programme designed by an Irish scientist is among the 10 most frequently cited research publications of all time, the international science journal Nature magazine has revealed.

A 1994 research paper co-authored by Professor Des Higgins of University College Dublin, which set the international standard for DNA sequence analysis, was recognised as the 10th-most cited research publication by Nature.

Its top-100 list is based on a publication’s citation rate: in other words how often other scientists have cited that publication as they advance their own work.

In 1988 Prof Higgins developed the programme called Clustal for aligning protein sequences. But it was a 1994 research paper, describing a user-friendly version of the software, which earned Prof Higgins and co-authors, researcher Toby Gibson and computer scientist Julie Thompson, their spot in the top-100.

The 1994 paper has been cited over 40,000 times while a 1997 paper also co-authored by Prof Higgins on a later version of the software called ClustalX has been cited almost 25,000 times and ranks in 28th place in the list .

Speaking to The Irish Times today Prof Higgins said it was “a huge honour” to be included: “I am extremely pleased I can assure you,” he said.

A professor of bioinformatics at the UCD Conway Institute, Prof Higgins is also a principal investigator at Systems Biology Ireland.

He has been working in the areas of bioinformatics and molecular evolution since 1985, predominantly on methods and software for DNA and protein sequence alignment.

In 1988 Prof Higgins developed the original Clustal programme and in 1994 ClustalW was developed, a major innovation of which was that it worked on personal computers meaning it could be used in laboratories everywhere.

The programme “allows researchers to describe the evolutionary relationships between DNA sequences from different organisms, to find matches among seemingly unrelated sequences and to predict how a change at a specific point in a gene or protein might affect its function” according to Nature.

He was listed as one of the World’s Most Influential Scientific Minds 2014 by Thomson Reuters.