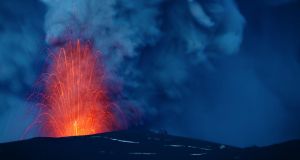 Eruption of Eyjafjallajökull volcano in Iceland. Dr Teresa Ubide from Trinity College says the crystals they study come to the surface during an eruption. File photograph: Eric Meola/Getty Images

Researchers at Trinity College Dublin have discovered a way to track the history and “personality” of a volcano by studying tiny mineral crystals that form in lava.

The remarkable thing about the approach is that it relies on analysing minute crystals just a millimetre or two across that originally formed several kilometres beneath the surface.

The crystals get to the surface during an eruption and you are able to read what went on down there and what triggered the eruption, explains Dr Teresa Ubide, a research fellow in geology in Trinity’s school of natural sciences.

A volcano in Iceland would produce very different crystals than a volcano in Italy, she says so the information gleaned from one would be personal to that volcano.

The researchers developed a way to examine these crystals and each one carries the story of what was happening deep underground, as they write in the journal Chemical Geology.

Volcanoes such as Eyjafjallajökull in Iceland can remain inactive for decades before suddenly blowing their tops. This happens when magma, liquefied rock, pushes upwards underneath the volcano.

“The magma can get stuck in the crust several kilometres underground where it will cool slowly and the crystals will form.”

It might just sit there until another upwelling of magma occurs, but this will be a new batch and will be a bit different. It will deposit a fresh layer on the original crystal and so the crystals will have captured information about two magma events.

This can happen again and again with layers being added to the crystals, but there they will remain unless a lava flow brings them up to the surface, Dr Ubide says.

Dr Ubide and her colleagues are working with crystals recovered from the Mid-Atlantic Ridge, a split in the seabed where lava rises from deep in the earth. Science Foundation Ireland provided funding for the research.

They use a laser to release surface material from the crystals and then analyse trace elements in it, for example chromium and nickel metals.

“These elements in small concentrations give us extra information about the volcano’s history and the processes taking place at depth.”

She believes that this new source of information about volcanic processes may help them predict when an eruption might occur.

“You assume a volcanic system has a behaviour but if you study the products of past eruptions you can imagine it might behave in a similar way in the future.”

It tells you the conditions that need to be in place to cause an eruption, she says.