‘There’s no such thing as a superfood. It’s nonsense’ 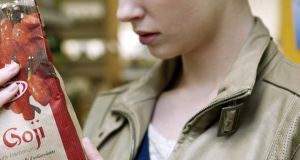 Some properties pinned on superfoods are misleading: the iron in goji berries and cereals is wrapped up in plant compounds and is far less accessible than iron in meat. Photograph: BSIP/UIG via Getty Images

There is no limit to what goji berries can do for you: build vitality, improve eyesight, fight cancer, boost fertility and provide more iron than steak.

A quick online search of British and Irish newspapers will turn up these dubious claims and more. Gojis are within the pantheon of “superfoods”, boasting wondrous nutritional qualities. Other supers include kelp, raspberries, spinach, oysters, walnuts and green tea.

“There’s no such thing as a superfood. It’s nonsense: just one of those marketing terms,” says University College Dublin professor of nutrition Mike Gibney, throwing on the garb of Ireland’s superfood Grinch. “There is no evidence that any of these foods are in any way unusually good.”

Yet websites and newspapers describe their precise benefits and report new studies on life-saving foods. For example, women who ate the most blueberries and strawberries had a 32 per cent reduction in their risk of heart attack, according to one widely reported study last year. The wonder effect was due to flavonoids, which are said to counter deadly plaque build-up.

Associations are easy to find but often misleading. There are many reasons why those who eat more berries might be healthier. Proving cause and effects requires an experiment. An intervention study would assign one group to eat berries and the other group not to, with all else equal. An analogy: to test whether the cock’s crow is causing the sun to rise, try a morning with and without the bird.

But dietary intervention studies almost never work out. One large study gave lung cancer patients antioxidants or no antioxidants; it had to be stopped because those on antioxidants were dying more quickly. Lack of evidence is why we do not see antioxidants and superfood miracle claims on foods.

“The European Food Safety Authority was created because the consumer was being conned by marketing people,” says Gibney. The authority bans health claims lacking scientific evidence, so you might find amazing health claims about superfoods in books and on websites, but you won’t on supermarket shelves.

The EFSA looked at the claims of a blueberry juice drink on the Irish market that said blueberries had a wide range of health benefits, such as anti-ageing properties. It was rejected. It looked at a claim that bioflavonoids maintain healthy blood circulation. Also rejected. Natural berries contain antioxidants and so are suitable for a heart-friendly diet? Rejected.

It is not that natural foods touted as superfoods are bad choices. “I don’t think it’s a bad term. These foods provide benefits and are more nutrient-dense than others. That concept is fine, but I just wish we had more solid science to show that there are superfoods,” says Prof Barbara Stewart-Knox at the University of Bradford, who has studied food and its effects on mood and has sat on EFSA panels to review claims. “Industry is very interested. They want to make psychological claims on foods to market them. That is fair enough, but we don’t have the science.”

Prof Stewart-Knox found associations between folate and zinc status and mood, but neither folic acid nor zinc supplements improved mood in a trial carried at the Northern Ireland Centre for Food and Health. “When you intervene with a nutrient there tends to be no effect,” she says.

Other properties pinned on superfoods are misleading: the iron in goji berries and cereals is wrapped up in plant compounds and is far less accessible than iron in meat. Other claims such as “boosted metabolism” are meaningless. Although there are indications of health benefits from plant flavonoids from animal studies, it is not proven in people.

Prof Ivor Perry, public health expert at University College Cork, pins the rise of superfoods on a need to find a magic bullet, “a food that if you eat enough of you will live forever”.

Magic is great – if it works. Perry says experts agree on what makes a healthy diet: a high intake of fruits, vegetables and nuts, salads dressed with healthy oils, more fish, less meat and high-fat dairy products and processed foods. And he says tailored diets can help those with medical conditions such as high blood pressure.

But does the term “superfoods” do any harm? “The problem I have with it is that something gets labelled as a superfood and everyone thinks, that’s what I should eat,” says dietitian Sarah Keogh of the Irish Nutrition and Dietetic Association.

“For years everyone was eating blueberries, yet cheap and simple vegetables like onions and carrots have loads to offer; sometimes [the superfood phenomenon] fuels the idea that healthy eating is expensive.”

For those planning festive indulgences, Prof Gibney says, “There’s no such thing as a good or bad food. There are good diets and bad diets. The greater variety in your diet, the more likely it is to provide a reasonable balance. And a lot more plant food and a lot less animal food is not a bad idea.”

People who eat lots of fruit and veg, which contain antioxidant compounds, tend to live longer; natural antioxidants such as vitamin E can mop up free radicals, which damage cells – and so, the argument goes, antioxidants must be good. But antioxidants have fared badly in randomised controlled trials. A large trial with vitamin E and beta-carotene in lung cancer patients showed no effect or a negative effect.

A study in smokers found no effect and suggested antioxidant supplements might have caused harm.

Some experts are now looking to personalised nutrition. Food4Me is a European Union-funded project led by UCD.

“An individual can go online, enter a typical pattern of eating for a week or so, do it several times to build up a picture, and based on that they will be told nutrients they are bad at and what in their diet is causing this,” says Prof Mike Gibney of UCD. “When they go to the supermarket they will know what they need to fix their diet.”

November is Food Month in The Irish Times