The microbial mix: Invite the right guests to the dinner party in your gut

The ‘microbiome’ is proving to be a treasure trove for researchers, who have found a link between health and the quality of bacteria in the digestive tract 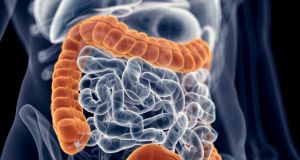 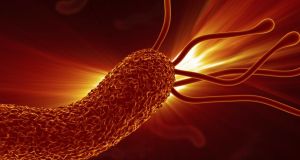 The bacterium Helicobacter pylori, which has been linked to peptic ulcer disease and gastric cancer. Illustration: Thinkstock

Food isn’t exactly a medicine, but a growing body of research suggests we might be able to treat difficult diseases by eating carefully. It has less to do with the food itself than with the resultant gut bacteria that assemble inside you to digest it. Studies of gut bacteria have shown that the microbial mix found there can influence health directly.

Researchers around the world are chasing after the “microbiome”, the combination of thousands of bacteria strains and their genes. It is proving something of a treasure trove, a source for novel antibiotics and probiotic organisms.

As a result, the number of papers and studies involving the microbiome have risen exponentially over the past decade, says Prof Fergus Shanahan, director of the APC Microbiome Institute in Cork. And Ireland was there from the beginning.

“It started 12 years ago when Science Foundation Ireland put out a call for research centres,” he says. UCC bid for a centre that would concentrate on identifying useful substances produced by the complex mix of bacteria living in our gastrointestinal tracts.

We each have about 1kg of bacteria living there. The early thinking was that the bacteria did little more than digest your food. But the APC and other labs began to discover the microbiome was doing much more, says Shanahan.

“Two things made it all start. First was the observation that germ-free animals were not normal and had distorted immune systems, gut function and non- matured organs. Everything that has happened since came from these germ-free animals,” he says. “Signals were coming from the gut microbes that supported growth and health.”

The second thing was the discovery of the link between the bacterium Helicobacter pylori and peptic ulcer disease and gastric cancer. Get rid of the bacterium and you get rid of the ulcers, a finding that won Barry Marshall and Robin Warren the Nobel Prize for medicine in 2005.

“The lesson was more than just ‘a bug is associated with a disease’,” he says. It was that there is an association between health status and bacteria in the microbiome.

The timing could not have been better for the institute, given that it was up and working before others starting looking.

“We were part of the story and certainly ahead of the curve. We had a collection of [principal investigators] who had research areas in common and could go after it.”

As a result, the institute has been ranked second in the world for citations on its work in probiotics. It is now a major international player in microbiome research.

It found that “tea and toasters” – usually older people who consumed little more than that for breakfast – had less diverse microbiomes. They linked this reduced diversity directly to increased frailty in these individuals. Microbial diversity is therefore a health advantage.

Similar work is under way at other centres. Research at UCD’s Conway Institute found that changes in gut microbiota may play a direct role in the reduction of body fat after bariatric surgery. Collaborators at the University of Colorado, Boulder, and Washington University, Missouri, transferred microbes from an obese person into germ-free mice; the result was fatter mice. They believe microbes from lean people would protect the mice against weight gain.

Researchers at the University of Gothenburg fed two groups of mice diets rich in either fish oil or saturated fats. The two groups had very different microbial communities as a result, but the research suggests that the resultant gut bacteria are partly responsible for the beneficial effects of fish oil.

Shanahan warns against overstatement when it comes to mining the microbiome and what it might deliver, but the research discoveries show what we might expect. He believes new biomarkers for disease risk will be microbial. “There are new antibiotics, new biomarkers. It is being translated into societal benefits,” he says.

Faecal transplants that allow sharing of a healthy microbiome are already being used to control Clostridium difficile infections. He believes new kinds of foods will be developed, and not just to control obesity. “You need to think about microbial diversity because you are feeding the microbes,” he says.

There will also be therapeutic intervention to protect against future disease. Recent research has suggested a Caesarian-section birth leaves a child at greater risk of immune system weakness and allergies than vaginal delivery. It should be possible to prevent this by exposing the child to vaginal microbes. Adjusting the microbiomes of pre-term infants might also provide a therapeutic benefit and improve their chances of survival.

You probably know about probiotics – “good” bacteria that help your digestive tract – but have you ever heard of psychobiotics? A €4.8 million research effort is under way in Cork to develop probiotics with a mental-health benefit.

“Healthy mental functioning and healthy ageing are dependent on the diversity of the microbiome,” says Prof Ted Dinan, professor of psychiatry and a principal investigator at the APC Microbiome Institute. “What we are primarily looking for is to identify a psychobiotic: a probiotic that can deliver a mental-health benefit.”

He and Prof John Cryan, also an investigator at APC, will lead the project. They have been searching the microbiome for such substances and have found a number that hold promise.

Some interact directly with the brain; others communicate via the vagus nerve, he says. “There are many different routes of communication between these microbes and the brain.”

The €4.8 million has come from UK company 4D Pharma, which develops live biotherapeutics. It too has been mining the microbiome for substances with therapeutic promise.

In particular, the study will look for biotherapeutics for autism spectrum disorder and associated central nervous system disorders. There is a huge unmet need for new treatments, given that one in 70 children is reported as having a spectrum disorder. Many spectrum disorder patients also have gastrointestinal problems, and so do patients with depression and anxiety.

Research has shown these conditions reduce the ability to keep certain molecules from crossing through the gut wall to cause inflammation.

One early approach will be to look for substances that can improve the gut’s barrier function and prevent the inflammation, Dinan says.