The global march of antibiotic-resistant bugs

While media attention in Ireland has primarily focused on MRSA, there are many other forms of multidrug-resistant bacteria on the rise here and around the world 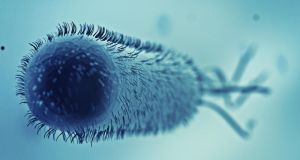 Although some progress has been made in the treatment of MRSA, there have been fewer advances in treatments for other bacteria such as E.coli, above. Image: Getty

Antibiotic resistance is not news to anyone in Ireland: we have lived with alarming levels of MRSA in our hospitals for many years.

The World Health Organisation recently published its first global report on antimicrobial resistance. In the report, Dr Keiji Fukuda, the WHO’s assistant director general for health security, discussed how resistance has “reached alarming levels in many parts of the world”. Many of the available treatment options for common infections are now becoming ineffective.

While media attention in Ireland has primarily focused on MRSA, there are many other forms of multidrug-resistant bacteria in this country. Dr Dearbhaile Morris works in the antimicrobial resistance and microbial ecology group at NUI Galway. She has a particular interest in a group of bacteria, Enterobacteriaceae, that generally live in the gut. Many species in this group, including E.coli, have become resistant to antibiotics. Morris says this is down to a number of reasons, but is primarily due to the “pressure exerted by the presence of antibiotics”.

When antibiotics and bacteria come in contact with each other, pressure is exerted on the bacteria. “If antibiotics are used too casually, you’re basically performing a natural-selection experiment,” says Prof Aoife McLysaght, who researches molecular evolution in Trinity College Dublin. If the antibiotic isn’t prescribed correctly or taken properly, it results in the elimination of the weak bacteria, allowing the stronger, more resistant population to survive.

How did antibiotic resistance evolve in the natural environment? Dr Fiona Walsh, from the antimicrobial resistance group at NUI Maynooth, hopes to answer this question so that “we understand how resistance occurred in the beginning”. Her plan is to sequence DNA she finds in the soil to search for resistance genes. “If I have a resistance gene in soil, is it eventually going to get into a human pathogen that we find in a hospital or community infection in 10 years?”

One resistance mechanism already present in the environment, in hospitals and the community are the extended spectrum beta-lactamases (ESBLs) enzymes. These break down many of the beta-lactam group of antibiotics. “ESBL-producing bacteria are widespread in hospitals and the community,” says Morris. Outbreaks of resistant forms of Enterobacteriaceae have occurred in Irish hospitals over the past few years. Her group has found ESBL-producing E.coli in hospital effluent and in the source water of some group water schemes, but Morris says the studies they have done “are a snapshot of the situation in Ireland”.

Having antibiotic-resistant bacteria in your body doesn’t mean you will get an infection. “On an annual basis we probably have about 50 different strains of E.coli living in our gut, not doing any harm,” says Dr Stephen Smith, a clinical microbiologist based at St James’s Hospital, Dublin. Some strains can become a serious problem when they move into the urinary tract, followed by the kidneys and the bloodstream. To travel up the urinary tract, they have to go a large distance. “If you were the E.coli, it would be like crawling on your hands and knees from Dublin to Donegal in the dark.”

Smith’s research focuses on a process called “complement”, which kills susceptible bacteria in the bloodstream by puncturing their cells. “We look at the expression of genes in response to the human host,” says Smith. He is trying to discover what happens when resistant bacteria are exposed to human complement. “Our theory is that if we find genes that are massively increased in response to complement, they could be new drug targets.”

Drug targets are vital in the global race against antibiotic resistance. The WHO’s recent report stated that the pipeline for the development of new antibacterial drugs is now virtually empty. Although some progress has been made in the treatment of MRSA, there have been fewer advances in treatment for other bacteria such as E.coli in the past 25 years. “There are very few treatment options for these bugs,” says Smith. “Some are in development, but there are very few in the clinic at the moment.”

Irish researchers continue to work with their global colleagues on the origin and mechanisms of antibiotic resistance. Although gut bacteria such as E.coli form only part of the problem, the growth in their resistance in recent years aligns with the worrying increase in resistance worldwide. Hopefully, science will prevail, but, as Fukuda concludes: “A post-antibiotic era, in which common infections and minor injuries can kill, far from being an apocalyptic fantasy, is instead a very real possibility for the 21st century.”

ANTIBIOTICS: HOW DO THEY WORK?

Life was very different before Alexander Fleming (above) discovered penicillin in 1928. Before antibiotics, one woman died out of every 200 who gave birth, but today’s Irish figures show that one woman dies per 10,000 live births. If you developed pneumonia, you had a three-in-10 chance of dying, but antibiotics now successfully treat the majority of these infections. Even a scratch was risky 70 years ago. One in every 10 people who got a skin infection from a scrape or cut or from scratching an insect bite lost a limb. These frightening statistics are the reason many experts fear the arrival of a post-antibiotic era.

Antibiotics use a variety of mechanisms to attack bacteria. Most beta-lactam antibiotics kill bacteria by preventing them making a cell wall. This is particularly useful because antibiotics don’t target our cells since they lack cell walls. However, a small number of bacteria don’t have cell walls either, so are naturally resistant to these drugs.

Toxic substances, including antibiotics, can be removed from bacteria by pumping them out of their cells using efflux pumps. Some bacteria have very wide-ranging pumps (all toxins are flushed) but others have evolved pumps for certain types of antibiotics.

A variety of enzymes also stops antibiotics working. Some bacteria have evolved enzymes that alter drugs so they can no longer do their job. Others destroy specific parts of antibiotics, making them useless, for example ESBL enzymes present in some strains of E.coli.