The ghost of Christmas waste: Consider the environmental impact of those gifts 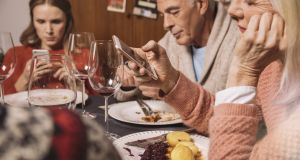 What can you do? Take into account resources, waste and carbon footprint, and buy local or recycled gifts where possible

The festive season poses a serious threat to the environment. An onslaught of food, toys, electronics, wrapping paper and “stuff” is on the way.

This stuff will include patio heaters and energy and resource-intensive smartphones, which, if not recycled, will pollute the ground and water with heavy metals. But technology has also brought us better renewable energy as well as “green products”, such as bamboo socks, that might not be quite as green as they first seem (it’s renewable and needs no fertiliser or pesticide, but transforming it from bamboo to clothes is chemical and energy-intensive).

So how can we find out which of our Christmas purchases have the worst impact? For 20 years, Peter Corcoran, professor of electrical and electronic engineering at NUI Galway, was editor of Consumer Electronics, the magazine of the Institute of Electrical and Electronics Engineers, an organisation with branches worldwide.

“There is a conflict in that the industry wants people to buy things but, at the same time, they have become more energy-efficient and reduced their impact on the environment,” he says.

Technological improvements have led to more energy-efficient electronics device, he says. “People have moved away from desktop computers towards tablets, which use a fraction of the energy. Plasma screen TVs have been replaced by LED screens, which are more energy-efficient. Christmas tree lights use less energy than the old filament bulbs. On the other hand, we are transferring more data than ever, and everyone is using the cloud. This requires energy to go into wireless networks, mobile phone towers and infrastructure. Data centres use lots of energy.”

Corcoran disagrees with the view that the electronics industry is still making many products that are not built to last: “They recognise that they need to move to sustainability because resources are finite. There are quite large numbers of smartphones recovered through recycling programmes. And the devices are becoming more repairable. Still, it is not near where it should be.”

I immediately boast about my trusty iPhone 4, which is now more than four years old and performing fairly well. Not for me the environmental damage of always buying the newest model. Corcoran deflates me. “The iPhone 4 is full of glue, so nobody will be able to take it apart and recycle it, but later models are easier to recycle.” I shut up.

Over at the National College of Art and Design, head of product design Sam Russell says that students learn about the bigger environmental context of the things they create, from the time the raw materials are dug out of the earth to the moment they arrive in a consumer’s home and, later, are disposed of.

“People are aware of the foods they consume, but less so around the products they consume,” he says. “Research around environmental impact shows that around 80 per cent of it is decided at design stage. The students know this but, at least in their early career, many of them won’t have the space or leeway within the industry to act on it.”

Although some are acting on it: NCAD graduate Garreth Smith, founder of Bruscair Boards, uses unrecyclable crisp packets to make skateboards.

Meanwhile, open source software and 3D printers could be a fig leaf for some of the industry’s environmental blushes. “What is really disrupting product design now is 3D printing, which is affordable and means products and parts like some lab equipment can be made locally and cheaply – and it might disrupt unfair trade as well,” says Russell.

Stephen Barry, an environmental scientist and campaigner who has worked with the EPA and Fingal County Council on climate change, air pollution and water quality, and is now carrying out research in DIT, points out that a lot of recycled products still end up in landfill. People should also consider that some products, including certain smartphones, are made with a lot of water and require energy-intensive manufacturing processes.

When making Christmas purchases, he urges people to consider the waste implications of the product. Can disposable coffee pods be recycled, and are you likely to do so? Does that cosmetics product have microbeads, which are an environmental hazard for the oceans and seas?

“It’s hard at Christmas,” Barry concedes. “There is pressure to buy presents. But if people can try to take into account resources, waste and carbon footprint, and buy local or recycled gifts where possible, manufacturers and retailers may respond. Consider whether you really need the latest electronic device. But it’s not enough. As long as society is based on consumption and growth, we need to pressure our politicians for change. The planet can’t cope. Something has to give.”

WE NEED MORE THAN QUICK FIXES

Low-energy lightbulbs, a bit more recycling, grants for better insulation, a few environmentally friendly Christmas gifts. They’re short-term, quick fixes, but these minor tweaks won’t balance out the dishwashers, power showers and other energy-intensive products we use. We need to look at and question our consumption and accumulation of material goods. This requires technological solutions but also a major re-examination of our lifestyles.

“We’re arguing that there needs to be a broader cultural change and that public policy measures to reduce energy consumption at the individual level are unlikely to succeed unless we have a good, comprehensive understanding of the energy cultures in which people act. Why might this student use this much energy, but that wealthier person have a higher carbon footprint?”

There has to be a social and political climate that supports technological advancements, she says. “We’re researching 30 European countries – and 10 in detail – and their households and communities. We need to move beyond ‘awareness’. People are aware. There are greater barriers that stop people. For instance, companies may be selling their green credentials but this marketing is still being encouraging us to buy and accumulate more stuff.”