The Edward Worth Library: a treasure trove of maths 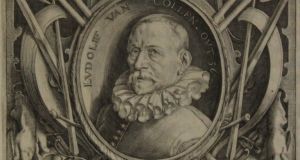 Ludolph van Ceulen: work of mathematician, who computed the value of pi to 35 decimal places, is included in the collection. (Image courtesy of the Trustees of the Edward Worth Library, Dublin).

The Edward Worth Library may be unknown to many readers. Housed in Dr Steevens’s Hospital, now an administrative centre for the Health Service Executive, the library was collected by hospital trustee Edward Worth and bequeathed to the hospital after his death in 1733.

The original book shelves and cases remain as they were in the 1730s. The collection is catalogued online.

We know little about Worth (1676-1733), a Dublin physician who lived on Werburgh Street. He studied at Merton College Oxford and the University of Leiden and graduated at the University of Utrecht. He was a connoisseur of fine bindings, and the collection comprises some 4,400 books, many of which are sumptuously bound, the earliest dating from 1475.

Their subjects range through medicine, science, philosophy, history and the classics, with additional works of literature, travel and reference.

There are about 100 mathematical books in the library. A project masterminded by Dr Maurice O’Reilly of DCU, with the collaboration of 20 undergraduate students, has led to the recent launch of an online exhibition of these books: http://mathematics.edwardworthlibrary.ie. It provides a delightful and informative browse through an easily-navigated website, with valuable descriptions of many of the books and helpful historical notes.

A good start might be an elementary text, The Young Mathematician’s Guide, by John Ward. It is “For the Use and Benefit of such as are wholly Ignorant of the very first Rudiments (Or have not the least Notion) of Mathematicks.” This description may comfort those of us who struggle with maths.

There are three early editions of Euclid’s Elements, including one by Isaac Barrow (1659). Barrow was the first Lucasian professor in Cambridge, a position he vacated in favour of Newton.

Archimedes Opera, in an 1558 edition, includes a derivation of his formula for the area of the circle. The value of pi to 35 decimal places was computed by Ludolph van Ceulen, whose work, inspired by Archimedes, is in the collection. John Wallis was the most important English mathematician before Newton, and his Arithmetica Infinitorum includes a remarkable infinite product expression for pi.

The algebraic books include Cardano’s Ars Magna, where the solution of cubic and quartic equations first appeared. This was also the first appearance of “imaginary” numbers, although Cardano did not grasp their significance. The library has the complete works of Cardano in 10 volumes. Works by most of the key players in the development of algebra – Viète, Descartes, Harriot, Wallis – are included.

There are books by Christiaan Huygens on mechanics, geometry, astronomy and even probability. The first Latin edition of Descartes’ Geometry (1659) originally belonged to Edward’s father John. Other European works include L’Hôpital’s Analyse, in French, but works by Leibniz and the Bernoullis are noticeably absent. Perhaps this was related to the notorious “calculus wars” between Newton and Leibniz?

There are two copies of each of Newton’s major works, with editions of his Principia from 1713 and 1726. Another online exhibition deals extensively with Newton and his works at the library. The latest maths book in the collection is Newton’s Arithmetica Universalis, published in 1732, the year before Worth’s death.

The collection, which has been described by a phrase of dramatist Christopher Marlowe, Infinite Riches in a Little Room, has been beautifully preserved, and visitors are welcome by appointment (http://edwardworthlibrary.ie).

Peter Lynch is emeritus professor at the school of mathematics and statistics, University College Dublin. He blogs at thatsmaths.com. His book That’s Maths has just been published by Gill Books.