That’s Maths: Where are the successors to William Rowan Hamilton? 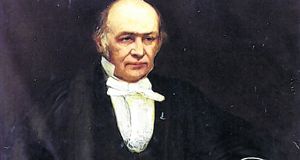 William Rowan Hamilton: A research mathematician has to be passionately interested and dedicated to sustain the great efforts needed to make progress

William Rowan Hamilton was Ireland’s greatest mathematician. His name is heard thousands of times every day throughout the world when researchers use the Hamiltonian function that encapsulates the dynamics of a vast range of physical systems. He achieved fame early in life and remains one of the all-time great scientists.

When only three years old, Hamilton was sent to live with his uncle James, who ran a school in Trim, Co Meath. James soon discovered Hamilton’s remarkable talents. Aged just eight, Hamilton competed against the American calculating prodigy Zerah Colburn in a mental arithmetic contest. Although Colburn was the clear winner, Hamilton’s interest in mathematics was fired, and became a passion that was sustained through his life.

Where are Hamilton’s successors today? When will Ireland produce another such mathematician? What makes a great mathematician? Certainly, keen intelligence and creative power are required, but the majority of gifted people never develop any taste for the subject. A research mathematician has to be passionately interested and dedicated to sustain the great efforts needed to make progress. The spark that fires this passion often arises in unexpected ways.

Carl Friedrich Gauss made some ground-breaking mathematical discoveries in his youth. In 1791, when but 14 years old, he was given a present of a book of logarithms that included a table of prime numbers. Fascinated by these, he quickly recognised a pattern in the distribution of the primes. It took another century before mathematicians could provide a complete proof of his conjecture.

Gauss, one of the greatest mathematicians of all time, was born into a poor family in an age when mathematics was a pursuit of the privileged few. Fortunately, Ferdinand, Duke of Brunswick, who appreciated the value of education, kept a lookout for talented subjects whom he could support. The duke paid for Gauss to attend university and remained his patron for 15 years.

In her early youth, the American mathematician Julia Robinson heard a radio programme about Derrick Norman Lehmer and his son Derrick Henry, and about their work on computing ever-greater prime numbers. This triggered an interest that led her on to make major contributions to Hilbert’s tenth problem, a long-standing and difficult problem in number theory. In 1983, Robinson became the first woman president of the American Mathematical Society.

In all these cases, interest was awoken at an early stage, sometimes by a wise teacher, sometimes by a chance event. This is typical: Andrew Wiles, who proved Fermat’s last theorem in 1994, first read about this intriguing problem when he was aged just 10. He was captivated and realised at that early stage that he would never let the problem go.

Maths Week Ireland takes place from October 15th to 23rd. It is a partnership effort by universities, institutes of technology, libraries, museums and other groups. During the week, awareness and appreciation of mathematics will be promoted through a wide range of events and activities. Perhaps one of these will be a trigger for the next Hamilton.