That’s Maths: The hole truth about doughtnuts and hyperspheres 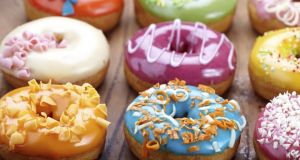 A doughnut: the number of holes determines the topological character of a surface. Photograph: Thinkstock

Topology is the mathematics of shapes. Geometers consider lengths, angles and other details. Topologists are more interested in overall, global aspects; properties that survive when a shape is distorted or stretched, as long as it is not torn. For a topologist, a sphere is the same as a cube: they are both three-dimensional shapes without any holes.

A doughnut has a hole, so it is different from a sphere. Spectacle frames have two holes, as have handcuffs, and so on. The number of holes determines the topological character of a surface. Two-dimensional surfaces have been completely classified using this idea.

The French mathematician Henri Poincaré knew that a sphere is characterised by the property of having no holes. In 1904 he posed the corresponding question for hyperspheres. The hypersphere is the set of points that are equidistant from a central point in four- dimensional space. It is much more difficult to visualise than the usual sphere.

How did Poincaré make this precise? If you draw a loop on a sphere (say, the Equator) you can shrink it to a point by moving it around. But a loop around a doughnut gets blocked by the hole and cannot be shrunk to a point. If every loop can be contracted to a point, then there are no holes.

The question Poincaré posed is whether the hypersphere is the only solid shape with no holes. But he could not answer the question. It was considered to be one of the most important outstanding problems in mathematics. Numerous claims of a proof were made but, until recently, all were shown to be flawed. The problem seemed unassailable.

In 1982 the American mathematician Richard Hamilton came up with an ingenious plan of attack. He would treat curvature as something fluid that could change over time. Heat always flows from hotter to colder places, smoothing out differences. What if we tried to smooth out a shape in this way?

Hamilton’s idea was to start with an arbitrary shape without holes, and simplify it by smoothing out the curvature, allowing it to flow around the shape. He was hoping that this would always lead to a hypersphere, proving Poincaré’s conjecture. Sadly, there was a major hitch: the flow sometimes caused the curvature to grow without limit, forming a singularity.

In 2002 and 2003 the Russian mathematician Grigori (Grisha) Perelman posted three preprints on the internet. He used Hamilton’s strategy but overcame the difficulties with singularities by performing “surgery” on the shape. He found that every shape without holes would eventually become a hypersphere.

Perelman’s preprints left several gaps, and it was not clear whether or not he had proved Poincaré’s conjecture. But his work was intensively studied by several high-profile mathematicians, who confirmed his result.

In 2006 Perelman was offered a Fields Medal – comparable in prestige to a Nobel Prize – for his work. He refused the prize, saying he was not interested in money or fame.

In 2010 the Clay Mathematics Institute announced the award of the first Millennium Prize to Perelman. This would have made him a millionaire overnight. But Perelman turned down the prize, saying his contribution to proving the conjecture was no greater than Hamilton’s.

Perelman now lives reclusively in St Petersburg, and it is unclear whether he has abandoned mathematics. Let us hope not, for he is fearsomely brilliant. Such people are very rare, and six Millennium Prize Problems remain to be solved.

Peter Lynch is emeritus professor of meteorology at University College Dublin. He blogs at thatsmaths.com