That’s Maths: How many gifts did my true love give to me overall?

We can easily count them, but this is tedious and there is a good chance of an error. Here’s a better way 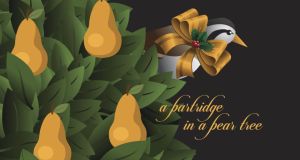 We all know the festive carol The Twelve Days of Christmas. Each day, “my true love” receives an increasing number of gifts. On the first day there is one gift, a partridge in a pear tree. On the second, two turtle doves and another partridge, making three. There are six gifts on the third day, 10 on the fourth, 15 on the fifth, and so on. Here is a Christmas puzzle: what is the total number of gifts over the 12 days?

While you work on that, here is a riddle: why do mathematicians confuse Halloween and Christmas? Because 31 October equals 25 December. If this makes no sense, recall that three times eight plus one makes 25, so the octal number 31 equals the decimal number 25.

Each day brings a greater triangular number of gifts. But how can we compute the total number without actually adding them up? We need to sum the first 12 triangular numbers. We are going to arrange them in a pile, but stacking leaping lords, laying geese and dancing ladies is inconvenient, so let us take a Christmas bauble to represent each gift.

We start with 12 triangles of baubles, one for each day. We can stack the single bauble for day one on top of the three for day two. This gives a little pyramid of four baubles. We can place this on top of the six baubles representing day three to give a larger pyramid with 10 baubles. Eventually we come to the largest triangle corresponding to the gifts received on the 12th day. Putting N = 12 in the formula given above we get (12 x 13) / 2 = 78. (By all means, add up the numbers from 1 to 12 if you have any doubts.) We obtain a stack having three triangular sides and a triangular base, or four faces in total. This is called a tetrahedron. The tetrahedron is one of the five Platonic solids, known since ancient times. I will skip the details, but it is easy enough to show that the number of baubles in a tetrahedron with N layers is:

Numbers of this form are called tetrahedral numbers. Plugging in the value N = 12, this comes to 364, the total number of gifts, almost one for each day of the year. True love indeed.