Space race: the satellite that’s catching up with a comet

A space adventure to land on a comet, ‘one of the most extraordinary feats of space engineering ever achieved’, is close to happening after a 10-year mission 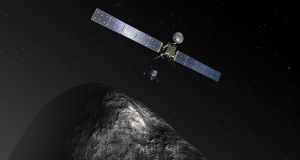 A space adventure like no other is about to get under way, one that will help to answer profound questions about the origins of our planet and life upon it. The €1 billion effort will see a lander drop on to the back of a comet as it races towards the sun at 37km per second.

The Rosetta mission involves sending a satellite and surface lander out into space for an encounter with Comet 67P/ Churyumov-Gerasimenko. The mission was agreed in 1993 and finally launched in 2004. In six days’ time Rosetta will glide slowly into place above the speeding comet.

“This is one of the most extraordinary feats of space engineering ever achieved,” said Kevin Nolan, physics lecturer at Institute of Technology Tallaght and co-ordinator in Ireland of the Planetary Society.

“The engineering of this is extraordinary. It is quite remarkable they have pulled it off so far. The science is also very strong, in particular testing a whole range of theories about the origin of the solar system, the origin of the Earth and of life.”

The 10-year journey that has brought Rosetta into position above the comet is a reflection of this complexity. The satellite and its piggy-backing lander launched from Kourou, French Guiana, then became a “cosmic billiard ball” circling the sun almost four times, dipping into the asteroid belt twice and gaining speed with gravitational kicks from one fly-by of Mars and three Earth fly-bys.

Rosetta carries 11 experiments, including cameras and a collection of detectors, and these were put to good use while coasting through the asteroid belt, says Laurence O’Rourke, from Killucan, Co Westmeath, who is one of two science operations co-ordinators for the European Space Agency project.

It did a fly-by of asteroid 2867 Steins in 2008 and of 21 Lutetia in 2010. Rosetta was put into hibernation for 31 months before controllers brought it out of sleep last January to begin the final months of its long journey.

O’Rourke has been busy ever since as coordinator for the science side of the mission. “It is a flying laboratory,” he says. “It was designed to study a comet up close and personal.”

He and his team are putting together a timeline of what the instruments will do for the coming two years, in conjunction with the teams that built the instruments. “It is centralised planning on how to extract the maximum science from each of the instruments,” says O’Rourke.

Two weeks ago, the European Space Agency released the latest pictures of the comet, showing its unusual peanut-like shape. But this was from 10,000km away. There will be much data collection and many pictures taken before Rosetta arrives at the comet about 10am or 11am Irish time next Wednesday, August 6th.

Initially, the satellite will study the shape and rotation of the comet, which measures 4km by 3.5km. The plan is to put Rosetta into orbit around it. The satellite’s instruments will then collect data about the dust cloud around the body, its internal structure, what it is made of and what gases it is giving off.

All of this will be done while the comet is still in a resting state: that is, when it has no visible tail and is not releasing jets of gas and dust. Its active phase comes later as it gets closer to the heat of the sun.

“The idea is to get there when it is more or less sleeping,” says O’Rourke. “We will watch it wake up, release the lander on to the surface and watch as the object becomes alive.” The lander will stick with it, following the comet across the back of the sun.

One of Philae’s key experiments will be to analyse water ice from the surface, the reason comets are often referred to as “dirty snowballs”, says Prof Tom Ray of the Dublin Institute for Advanced Studies.

Philae will measure the ratio of water to isotopes of heavy water, for comparison with this ratio in water from the oceans. If there is a match, it will support theories that Earth’s water was delivered via a bombardment of comets 100-200 million years after the planet formed, says Ray.

O’Rourke, who will be at the centre of the research effort, is full of anticipation. “It is great after so many years to actually be arriving. I am so looking forward to it.”

PHILAE LANDER: THE KEY TO THE OCEANS

The Philae lander is the heart of the Rosetta mission. The information it gathers could tell us the source of Earth’s oceans. Philae is about 1sq m and weighs 100kg. It has nine advanced instruments packed into this small space, which will provide a wealth of information about the comet.

After its arrival, the Rosetta orbiter will spend months mapping the comet’s surface and will help to identify an ideal landing site for Philae.

Then, in November, the lander will strike out on its own to make a soft landing on the comet. It will have a small rocket to get it there, but all this will be done at a leisurely walking pace. Its splayed legs will make first contact and absorb the “bounce” when it hits, with the rocket holding it down in place. The legs can right the lander if it falls over or is not on a good spot. Then Philae will fire a harpoon down, anchoring it to the surface.

Experiments will study the dust cloud and gases around the comet, and cameras will record everything. One of its most important experiments will be to drill into the surface and drop icy material into boxes that will then be sent through an oven for analysis.

“The landing studies could have repercussions for our understanding of how oceans formed on the Earth,” says Tom Ray.

If the water isotopes found on the comet match the water on Earth, it makes it almost certain that the oceans formed with water from colliding comets.

Maureen O’Hara statue ‘not a good likeness’ as refund given – FOI 20:43
Flooding ‘not an issue’ at most bog rewetting sites, committee told 20:32
Martin signals aim to bolster social dialogue arrangements 20:29
Man jailed for violent robbery of drunk victim in late-night attack 20:24
Offaly man jailed for sexually abusing a teenager he met on Snapchat 20:02