Scientists in Cork uncover link between gut microbes and nerves 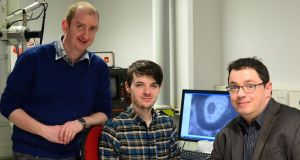 Scientists in Cork have discovered a previously unknown connection between the mix of microbes in our gut and how our nerves work.

The finding could have implications for the treatment of diseases such as Multiple Sclerosis (MS). The microbes exert a direct influence on the production of myelin, a protective layer covering nerves in the same way plastic insulation envelops electrical wiring.

Those with MS suffer from a loss of myelin. But in experiments the researchers were able to build up myelin in mouse models, publishing their findings on Tuesday afternoon in the Nature journal Translational Psychiatry.

“This is one of these kinds of paper that took us somewhere we weren’t expecting to go. We are not a myelin lab, but are very excited,” said Prof John Cryan who heads the department of anatomy and neuroscience.

There is more than a kilogram of bacteria and other micro-organisms living in our gut and collectively they are referred to as the microbiome.

Over time scientists have found that the microbiome can influence the body, for example, the immune system, obesity, bowel disorders and metabolic syndrome, said Prof Cryan, who is also an investigator in the Science Foundation Ireland funded APC Microbiome Institute.

More recently it has emerged that the microbiome can also influence conditions such as stress, anxiety, depression and possibly spectrum disorders.

In the case of these new experiments, the microbiome was shown to exert a direct influence on the front part of the mouse brain.

We should not be surprised by this, given bacteria inhabited the Earth long before humans, he said.

“The bacteria were there first in term of evolution. We have co-evolved with them and the brain evolved in this environment. Our brains have developed with signals from the microbes all the time.”

So it is no surprise that the microbiome influences brain function, he said.

In this case they used a “germ free” mouse, studying the mix of genes being expressed, and found there was a lot of activity from myelin-related genes.

When they looked at the nerve cells through a microscope they could see extra myelin production built up on the nerves, but only in the pre-frontal cortex.

When these mice were given a normal microbiome the myelin genes reduced their activity, but if the germ free status was returned myelin production increased again.

It is likely that “key signals” from the gut to the brain put a brake on myelin processes, said Prof Cryan.

“We believe we demonstrate for the first time that the microbiome is necessary for appropriate and dynamic regulation of myelin-related genes,” Prof Cryan and colleagues write in Translational Psychiatry.