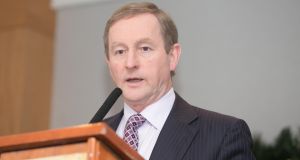 “Innovation 2020 is a fundamental part of our plan to keep the recovery going,” he said.

Mr Kenny announced the strategy yesterday at the Innovation Showcase 2015, a gathering of companies, researchers and investors, at the Convention Centre Dublin.

The strategy promises to increase national research spending by State and industry to 2.5 per cent of GNP, up from the current 1.8 per cent. This would raise the combined investment from about €2.9 billion a year to about €5 billion by 2020.

It will support blue-skies research as well as applied research and includes new funding schemes, along with up to three more large national research centres, joining the 12 already in place.

The Government is also to open negotiations to join two international bodies, the European Southern Observatory and Cern, the European nuclear research centre.

Minister for Jobs Richard Bruton told the conference innovation could help to raise living standards and “talent is the key”. He said the strategy was about “becoming a global innovation leader”.

The new funding schemes would help drive innovation, but “the devil will be in the details”, said Prof Kevin Mitchell of Trinity College, Dublin.

Prof Mitchell was one of the authors of an open letter to the Government signed by more than 1,000 scientists, urging a rebalancing of funding. “We certainly hope that the scheme will be given a substantial budget to balance out the very strong focus on short-term, commercialised research across the rest of the strategy,” he added.

The head of funding body Science Foundation Ireland, Prof Mark Ferguson, welcomed the strategy, saying it would future-proof the economy by focusing on excellence, talent and impact.

Ibec also welcomed the strategy and the increase in funding, but warned that it would succeed only if business was closely involved in its implementation.

The strategy sets out an ambitious role for Ireland as an innovation leader, said Prof Orla Feely, vice-president of research and impact at University College Dublin.