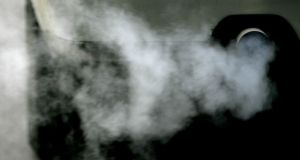 When you consider that our most basic needs are clean air, safe drinking water and healthy food, it is not surprising that Ireland’s Environment 2016 puts a strong emphasis on the links between a clean, healthy and well-protected environment and our health.

The European Environment Agency (EEA) estimates that poor air quality contributes to more than 400,000 premature deaths in Europe each year. This translates into 1,200 premature deaths in Ireland every year – mainly attributed to particulate matter from traffic fumes. This particulate matter is a complex mix of tiny particles and liquid droplets, which, when inhaled, can damage the heart and the lungs.

While our air quality is generally held to be good, the Environmental Protection Agency (EPA) report states that Dublin and Cork are now “hovering close to EU limits” on nitrous oxide levels emitted mainly from diesel vehicles. We previously exceeded these levels in 2009 but levels are rising again as the economic recovery translates into more vehicles on our roads.

The use of fossil fuels, particularly coal, turf and wood, for heating our homes continues to pollute the air in towns and villages outside the natural gas distribution network. The Government’s proposed extension of the smoky coal ban to small towns across Ireland in 2018 should address this issue.

In terms of water, the EPA’s sixth State of the Environment report points out that 70 per cent of our drinking water supplies are good. That leaves 20 per cent which are slightly polluted and 10 per cent which are moderately polluted. One of the biggest concerns in terms of water pollution is the risks of E.coli contamination from the 180,000 private wells that exist throughout Ireland. The report also states that there is still an unacceptable number of supplies on long-term boil water notices, where public water supplies need to be made safer.

Another concern is the increasing levels of antibiotics flushed into our water systems, principally from hospitals. This form of environmental effluent is adding to the worldwide problem of antimicrobial resistance which makes it harder to treat people with potentially fatal bacterial infections such as septicaemia and meningitis.

The report also raises the “environmental nuisance” caused by odour, noise and litter as a threat to human health and wellbeing. In fact, these three issues generate the most complaints to the EPA and local authorities. After poor air quality, noise nuisance was found to be the second-largest environmental source of human health morbidity and mortality in Europe in 2014.

The EPA is currently preparing “strategic noise maps” which will identify environmental noise from roads, railways and airports. Following these, local authorities will have to prepare noise action plans to manage environmental noise through better land use planning, traffic management and direct control of the noise from industrial sources.

And, albeit it is a limited problem, the naturally occurring radioactive gas radon is making people sick in some Irish homes. The EPA describes this as an entirely “fixable” problem as, once identified, radon can be eliminated either with an improved ventilation system or the installation of a damp-proof membrane under the ground floor of the house.