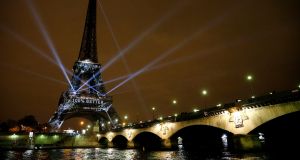 The Eiffel Tower lights up with colours and messages of hope on the eve of the climate conference in Paris: 190 countries are involved in the conference. Photograph: Yoan Valat/EPA

I keep hearing about a big climate change thing going on in Paris. What is going on?

There is a big international conference that starts on Monday, where 190 countries will try to reach agreement on stopping climate change. It has two short names so if you want to sound knowledgeable call it COP21 or CMP11, but its alternative name, the 2015 Paris Climate Conference, is easier to understand. The United Nations is behind it, and nearly every country in the world has said they will go.

Ambitions are high given the goal is to achieve a legally binding and universal agreement on climate change signed by all the nations of the world. That is not a small ask, and none of these big meetings ever tried to accomplish something as big as a universal agreement.

Not climate change again. Why are we still talking about this? I thought we already had agreements on this?

Climate change has been the subject of international discussions and negotiations for more than 20 years. There have been similar big meetings in Rio and Copenhagen and lots of smaller meetings, but the participants never manage to reach final agreements.

Because having to do something about slowing or stopping climate change is going to cost really big money, and neither rich nor poor countries will want to spend money if they think it will harm their economies. It is easier – and cheaper – to do nothing .

Given the meeting is taking place, I assume climate change is still happening?

It certainly is. The World Meteorological Organisation only last week released data showing that 2015 is certain to go down as the warmest year on record. Ocean temperatures are at their highest, sea level rise continues apace as ice melts in Greenland, and glaciers disappear.

This year we are likely to reach a milestone: average global temperatures will reach one degree above what they were in the pre-industrial era before humans began to release greenhouse gases like carbon dioxide in huge amounts.

That doesn’t seem like so much. What difference does one degree make?

Scientific research indicates that we will cross a little understood threshold if average temperatures pass the two degree point. There are indications that it represents a tipping point where runaway climate change starts to happen. This will melt even more land ice at both poles and drive sea levels higher and higher. Countries such as the Maldives will be among the first to disappear beneath the waves and low-lying countries and coastal communities around the world will be in trouble. This includes Ireland, by the way. No one will escape.

Why haven’t we done anything about this if it is so bad?

That is what these big international meetings are attempting to accomplish. Some have been better than others for getting things agreed. For example, the Kyoto Protocol adopted in 1997 was a plan to cut greenhouse gas emissions but US president George W Bush decided the US would not accept it. The COP7 meeting in Marrakesh in 2001 brought in rules for bringing the protocol into force.

But some things do get accepted over time and limits are set. That two degrees above pre-industrial temperature has been accepted internationally as a limit above which we cannot go. The question is will countries do what is necessary to stay below this limit? Holding to two degrees by 2100 means greenhouse gas emissions will have to be cut from today’s levels by 40-70 per cent.

So what are they going to try to agree at COP21?

The big carbon-emitting countries have already committed themselves to specific emission limits in advance of the meeting so these should come into force. The EU says it will cut emissions by 40 per cent compared with 1990 levels, achieving this by 2030.

This will have an impact in Ireland. Either we will have to produce more renewable energy – which some communities are resisting because of windmills – or we will have to look at large emissions sources such as agriculture and transport, which are contentious issues here.

Who else is promising to do something?

China says its emissions will peak in 2030, while the US has promised to cut emissions by about 26 per cent compared with the levels released in 2005. All the big emitter countries collectively responsible for 90 per cent of emissions now have targets to help them cut greenhouse gases.

If everyone agrees and if everyone sticks to the reduction plan then scientists believe this will hold temperature increases to 2.7 to 3 degrees by 2100. This is above the magic 2 degrees set by s scientists but if countries do nothing then we could see temperature rises of 5 degrees. That 5 degree increase is about the same temperature difference between the temperatures we have now and the temperatures on the planet during the last ice age more than 12,000 years ago.

How are poor countries going to do anything about this? There will be lots of money needed to change things.

Developing countries lobbied to bring about change. They argued that they weren’t the authors of this mess and that the rich countries who were should help pay to clean things up.

The meeting in Copenhagen, COP15 in 2009, accepted the idea and contribution levels were set. The promise was that by 2020 rich countries would be contributing at least €90 billion a year to help poorer countries. By 2014 the level of funding reached €56 billion so there is still a way to go.

So should we expect big things from COP21?

The challenge ahead – to stop climate change by 2100 – would be no small thing and no one attending the meeting will be under any illusions about how difficult it will be to achieve consensus.

Yet doing nothing is not an option. Failure to act pushes us into unknown territory with runaway climate change a real possibility. If this were to happen then no country can feel secure in the face of major alterations to climate. It is an outcome too horrible to contemplate.

Newly-appointed Junior Ministers will not get special advisers 20:33
Parents encouraged to ditch the car for ‘cycle bus’ 20:32
Students to wear face coverings in lectures where two metre distance not possible 20:28
Gardaí find potential breaches of Covid-19 rules in 24 pubs 20:15
Man charged with murder of woman (20) in Newry 20:04