NASA release new images of Pluto that were taken from its New Horizons spacecraft. Vieo: Reuters 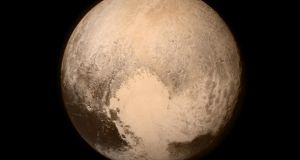 Pluto is now the gateway to a hitherto poorly appreciated third zone of our solar system. Photograph: Nasa/PA Wire

Showing mountain ranges taller than the Pyrenees and gorges three times deeper than the Grand Canyon, this week’s images from New Horizons are a confirmation that Pluto is more than a mere planet, or simply the runt of a litter with eight larger siblings.

Indeed, the discoveries make the debate about Pluto’s status as a planet redundant.

It no longer matters what we call it, because Pluto is now the gateway to a hitherto poorly appreciated third zone of our solar system – an idea first conceived at Daramona House, near Streete in Co Westmeath.

As early as 1938, Edgeworth plainly stated that newly discovered Pluto was too small to be a planet, but was probably the largest member of a family of objects that formed out of the rubble left over from the formation of the solar system.

These ideas were developed in the 1950s by a Dutch-American astronomer, Gerald Kuiper, and this third zone became known as the Edgeworth-Kuiper Belt, now frequently shortened to the Kuiper Belt.

In recognition of this, Stern indicated that his team will likely name a prominent feature on Pluto after Edgeworth.

The first high-resolution images of Pluto this week overturned decades-old theories about icy worlds beyond Neptune.

Scientists were thrilled and somewhat startled to see a mountainous landscape devoid of craters.

This landscape can only have formed if Pluto’s bedrock, which is water-ice, was somehow melted in the geologically recent past.

For years it was widely assumed that the worlds of the Edgeworth-Kuiper Belt were cold and lifeless places. This week we know that is not true. Pluto and its moon, Charon, have some source of internal heat driving geological processes on the surface.

The implications of this are potentially game-changing for future exploration of the Edgeworth-Kuiper Belt, according to Dr John Spencer of Southwest Research Institute, a co-investigator on New Horizons:

“This may cause us to rethink what powers geological activity on many other icy worlds.”

Added Stern: “We have settled the fact that these very small planets can be very active after a long time, and I think it is going to send a lot of geophysicists back to the drawing- boards to try to understand how exactly you do that.”

“Pluto is only one of many thousands of objects out there, and this is our first close look at one of them,” said Dr Mike Brown at the California Institute of Technology.

Brown’s discovery of ice worlds in the Edgeworth-Kuiper Belt first sparked a rethink about the solar system’s third zone and led to Pluto being recategorised.

Some researchers have long suspected that liquid water might exist beneath the surfaces of many bodies in the Edgeworth-Kuiper Belt, possibly in vast quantities, but their speculations have been muted because it was not clear how water could remain a liquid out there.

It was equally a mystery how living organisms would get the energy to survive so far from the sun.

They now have their answer, and astrobiologists will begin redoing their calculations about the possibility of life evolving in the most unlikely place imaginable.

All of which casts the legacy of Kenneth Edgeworth into a dramatic new light.

Sadly, Elliott died earlier this year – just as the full import of Edgeworth’s work was about to be revealed to us from five billion km away.

Broadcaster Leo Enright has reported from Mission Control on the flybys of every planet in the outer solar system, now including Pluto.