Oversharing on social media? You don’t know the half of it 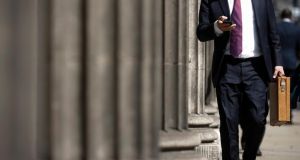 Off for a spot of lunch, are we? Photograph: Simon Dawson/Bloomberg

Social media and the apps we use to communicate with friends are getting close to revealing what we had for breakfast, or more accurately, dinner.

Computer experts in Birmingham used app data to reveal global eating habits even down to neighbourhoods in major cities.

The analysis shows when people tend to get up in the morning, when they prefer their main mean and even when they liked to have their favourite tipple, a session at the British Science Association’s annual science festival in Birmingham has heard.

“This is a dynamic picture of a city through the day,” said Dr Mirco Musolesi a lead investigator in the University of Birmingham’s School of Computer Science.

He joined with computer scientists at the Universidade Federal de Minas Gerais in Brazil to analyse data from the Foursquare app. This encourages users who are out for a morning coffee, a meal or a drink to sign on and broadcast their location to friends and comment on what to order or what cocktail to try.

They used data delivered by more than half a million Foursquare “check-ins” to do a range of analyses on how people like to eat, drink and entertain themselves. Dr Musolesi readily agreed that the data set was biased and not wholly representative to the wider community. Yet when we prefer dinner or how early we get up and buy a coffee are social activities that are a reflection of cultural norms.

People’s “digital traces” left behind on Foursquare could reveal these local norms. But they also allowed him to compare cities and whole countries to reveal temporal habits of a society.

The data revealed what we already know, for example that Brazilians prefer their main meal at midday while it is an evening meal for the UK and US. But it also showed that French and Brazilians tend to visit similar venues that serve similar drinks, with “slow food” venues more popular.

It showed that eating habits in London were more aligned with New York and San Francisco but these “international” cities had a more cosmopolitan approach compared to other US or UK cities.

He described it as “extremely fine-grained data” which could reveal small details typical of a city. “Happy hour in Birmingham happens an hour earlier than in London,” Dr Musolesi said. Yet Brummies also tend to get up an hour earlier, based on their Foursquare comments from coffee shops and morning eateries.

“It is a very cheap way of getting information on a global scale,” he said. This new level of scrutiny is highly valued by companies who are willing to pay social media companies such as Foursquare, Facebook or Twitter for data. “People using these services are highly interesting for companies.”

And this use of “big data” may soon become more important than the details captured by the national census. “This data is much more powerful than the census. The census tells you where a person slept. This tells you where they live,” Dr Musolesi said. “The big question is whether you can use this data for policy and decision making.”