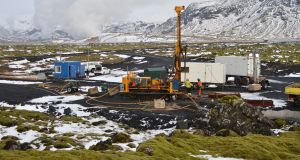 A safe and certain way to rid the atmosphere of excess greenhouse gas could be to turn it into chalk, research suggests.

The technique has been successfully tested by a British-led team at the world’s largest geothermal power plant in Iceland.

In less than two years, the gas reacted with calcium, iron and other minerals in the rock to form a whitish, chalky material.

Carbon is locked in a mineral, calcium carbonate, better known as chalk.

Turning CO2 into a chalky mineral is a better option than pumping large volumes of the gas into porous rock underground, the traditional method of geological carbon capture, it is claimed.

Experts have highlighted the risk of CO2 escaping back to the surface through fractures, or underground reservoirs being ruptured by earthquakes or human activity.

Until now it was thought that a major obstacle in the way of mineralising carbon was time, with previous studies suggesting the process could take hundreds or even thousands of years.

But at the Hellisheidi plant, which uses volcanically heated water to provide power for Iceland’s capital, Reykjavik, it took less than two years for more than 95 per cent of the injected carbon to solidify.

Lead scientist Dr Juerg Matter, associate professor in geoengineering at the University of Southampton, described this as “amazingly fast”.

He added: “Carbonate minerals do not leak out of the ground, thus our newly developed method results in permanent and environmentally friendly storage of CO2 emissions.

“On the other hand, basalt is one of the most common rock types on Earth, potentially providing one of the largest CO2 storage capacity.

“We need to deal with rising carbon emissions. This is the ultimate permanent storage - turn them back to stone.”

The pilot project, known as Carbfix, was started in 2012 with the aim of removing Hellisheidi’s CO2 emissions, along with foul-smelling hydrogen sulphide, another by-product of geothermal power generation.

The team initially piped 227 tonnes of CO2 mixed with water and hydrogen sulphide to a depth of 400 to 800m .

In 2014, buoyed by indications that much of the carbon had mineralised, Reyjavik Energy started injecting CO2 into the wells at a rate of 4,536 tonne per year.

Monitoring shows that mineralisation has continued at the same pace and this summer the energy company plans to double the injection rate.

One drawback of the process is that it requires very large amounts of water - about 21.8 tonnes for every ton of CO2.

But this could be solved by placing carbon mineralisation plants in or near the sea, scientists said.

Basalt, formed from volcanic lava, lines the floor of all the world’s oceans and accounts for 10 per cent of the continental crust which makes up the world’s land masses.

Results from the Carbfix project are published in the latest edition of the journal Science.

Co-author Martin Stute, a hydrologist at Columbia University in New York, said: “In the future, we could think of using this for power plants in places where there’s a lot of basalt - and there are many such places.”