Maths Week: Man with a mission talks maths with teens 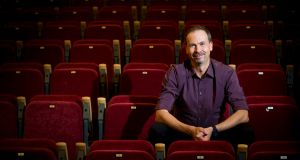 James Tanton: “Because mathematics has been on this planet for about 10,000 years – there’s got to be something to it that has intrigued mankind, and it’s not in the schoolbook version.” Photograph: John T Ohle 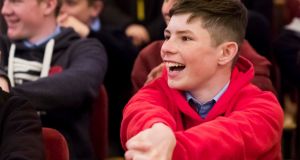 Robert Coffey from St Aidens CBS tries out one of the hand puzzles as he listens to James Tanton talking about maths at the RDS. Photograph: John T Ohle

James Tanton is on a personal mission. He wants to bring joy, wonder and pictures back to secondary school maths classrooms around the world.

“So much visual thinking is squelched out of the curriculum, which to me is insane because we’re very visual creatures,” said Tanton, the Mathematical Association of America’s resident mathematician.

“We think in terms of pictures a lot of the time – it’s a very powerful tool for problem-solving.”

He brought his ideas to more than 1,000 teenagers as part of Maths Week, Ireland’s annual maths festival. Presenting at the Royal Dublin Society’s concert hall, the mathematician drew a makeshift abacus, and proceeded to “explode” the pictures of dots onstage to take students from basic arithmetic to polynomials, calculus and advanced number theory in an hour.

“So there’s one story: a picture of an abacus essentially,” said Tanton, who earned a PhD in mathematics from Princeton University. “An abacus is actually profoundly deep – it takes you from beginning thoughts about place value all the way actually to unsolved research questions still baffling mathematicians.”

The students, who were absorbed by photos on Instagram and snapping infinite pictures of themselves to their mates via Snapchat before the programme started, were eventually calling out answers to increasingly complex problems.

Originally from Australia, Tanton taught university-level mathematics in the United States for 10 years before turning to secondary education. “I actually got saddened by it,” Tanton said. “Because mathematics has been on this planet for about 10,000 years – there’s got to be something to it that has intrigued mankind, and it’s not in the schoolbook version.”

He was a secondary school maths teacher for another decade while developing his theory about visual maths learning. Most kids go through school thinking different areas of maths have nothing to do with each other, Tanton added. Using pictures clearly shows then that there is a connected story within mathematics that builds on a single, fundamental base.

You can find more details about Maths Week at mathsweek.ie