Life on Earth ‘may have come from Mars’ 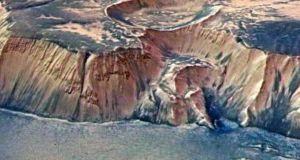 New research suggests the Red Planet was a better place to start biology billions of years ago than the early Earth. Photograph: Getty

Life on Earth may have started on Mars, growing evidence suggests.

An element believed to be crucial to the origin of life would only have been available on the surface of the Red Planet, it is claimed.

Geochemist professor Steven Benner argues that the “seeds” of life probably arrived on Earth in meteorites blasted off Mars by impacts or volcanic eruptions.

As evidence he points to the oxidised mineral form of the element molybdenum, thought to be a catalyst that helped organic molecules develop into the first living structures.

“It’s only when molybdenum becomes highly oxidised that it is able to influence how early life formed,” said prof Benner, from The Westheimer Institute for Science and Technology in the USA. “This form of molybdenum couldn’t have been available on Earth at the time life first began, because three billion years ago the surface of the Earth had very little oxygen, but Mars did.

“It’s yet another piece of evidence which makes it more likely life came to Earth on a Martian meteorite, rather than starting on this planet.”

All living things are made from organic matter, but simply adding energy to organic molecules will not create life. Instead, left to themselves, organic molecules become something more like tar or asphalt, said prof Benner.

He added: “Certain elements seem able to control the propensity of organic materials to turn to tar, particularly boron and molybdenum, so we believe that minerals containing both were fundamental to life first starting.

“Analysis of a Martian meteorite recently showed that there was boron on Mars; we now believe that the oxidised form of molybdenum was there too.”

Another reason why life would have struggled to start on early Earth was that it was likely to have been covered by water, said prof Benner.

Water would have prevented sufficient concentrations of boron forming and is corrosive to RNA, a DNA cousin believed to be the first genetic molecule to appear.

Although there was water on early Mars, it covered much less of the planet.

“The evidence seems to be building that we are actually all Martians; that life started on Mars and came to Earth on a rock,” said prof Benner, speaking at the Goldschmidt 2013 conference in Florence, Italy. “It’s lucky that we ended up here nevertheless, as certainly Earth has been the better of the two planets for sustaining life. If our hypothetical Martian ancestors had remained on Mars, there might not have been a story to tell.”

The Goldschmidt conference is jointly sponsored by the European Association of Geochemistry and the Geochemical Society.

Coronavirus: ‘Last time I saw her was when she was put into the ambulance’ 16:34
Coronavirus: ‘We are not here to go and hide in the Garda Station’ 16:06
Volunteers use online forum to mind children of healthcare workers 15:53
Coronavirus: Man who allegedly spat at garda brought to court by gardaí in protective gear 15:44
Irish flight bringing PPE from China arrives in Dublin 15:29