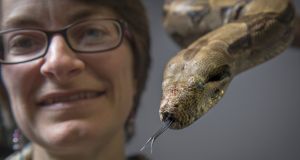 An Irish scientist has been able to reconstruct a fossil in full living colour for the first time.

Dr Maria McNamara, of University College Cork (UCC), has found a way to show the full colouration of the skin of a fossilised snake by studying the position of individual fossilised pigment cells in the skin surface.

Previous attempts to show the original skin tones of a fossil have only proved successful for brown, black or dark red.

The work by the palaeobiologist also shows skin surfaces that were iridescent in the living snake.

The fossil came from a sulphur mine near Libris in northeastern Spain.

“I saw the fossil 14 years ago and realised it included fossilised skin. I asked for and was given a sample and I tucked it away,” Dr McNamara said.

The 10 million-year-old fossil looked like a piece of stone, but Dr McNamara was able to reproduce the original colours once she started to study it in detail.

“I realised I had fabulous tissue preservation. I got more samples and realised that I could see many types of pigment cells preserved,” she said.

“Different pigment cells make different colours. We were able to identify the pigment colour by its size, shape and where it occurs in the skin.”

The thing that makes this possible relates to how the fossil was formed.

The buried soft tissues were turned into fossilised stone by a mineral, calcium phosphate.

This forms tiny crystals to replace the original tissue, but the crystals are so small they preserve everything, even structures inside a cell, Dr McNamara said.

“The crystals take on the form of the original tissue in 3d.”

She realised that she could identify the different pigment cell shapes to reproduce the original colours.

In this case, there were tans and greens similar to those seen in a modern boa constrictor, she said.

“The type of patterning was very like camouflage, so this snake was trying to keep itself hidden.

“What is really significant about this study is it is the first instance of colour reconstruction from mineralised fossils.”

Her findings are published on Thursday evening in Current Biology.