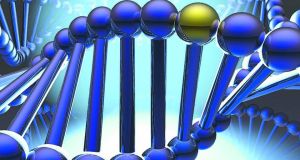 The team studied every gene in the genome of 363 patients with Motor Neurone Disease.

The discovery will advance knowledge of the mechanisms behind the disease and could also provide a future drug target.

Details of the findings were released in the journal Neuron. They describe the analysis of DNA collected from 363 people who have the disease and also have at least one other family member with it.

The analysis is staggeringly difficult, given it involved studying every gene in the genome of these patients, looking for patterns of rare but damaging mutations known to arise more often in patients with Motor Neurone Disease, said Dr Russell McLaughlin in the Academic Unit of Neurology and Smurfit Institute of Genetics at Trinity College Dublin, one of the report’s authors.

Prof Orla Hardiman, professor of neurology at Trinity and consultant neurologist at Beaumont Hospital, is also an author, as is Dr Kevin Kenna, who is spending a year in the lead laboratory for the study, headed by Prof John Landers of the University of Massachusetts.

“We are very connected internationally and are part of a big network of laboratories interested in Motor Neurone Disease,” Prof Hardiman said. “This is a relatively rare mutation, but it tells us about the biology of the disease,” she said. “What this gene is telling us is about one mechanism by which the disease can occur.”

Even though there are likely many more genes linked to the disease, each one that is found is of great importance, she said. It makes it possible to see what other genes interact with TUBA4A, and it could also yield up a drug target, Prof Hardiman said. “The bottom line is this is an important insight into the disease mechanism.”