Group will map out the future of EU research, development and innovation 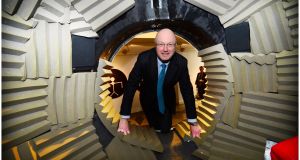 Prof Mark Ferguson: joins a group that will review the progress and impact of Horizon 2020. Photograph: Bryan O’Brien

The Government’s chief scientific adviser has been selected by the European Commission to join a 12-member group that will map out a vision for future EU research and innovation.

Prof Mark Ferguson is also director general of research funding body Science Foundation Ireland. Fellow members of the panel include scientists, company officials and academics who were selected from among 350 who had expressed an interest in joining the panel.

The High Level Group will focus on the effectiveness so far of the EU’s research budget, Horizon 2020.

“The group is charged with reviewing the progress and impact of Horizon 2020,” Prof Ferguson said. “That will influence the latter half of Horizon 2020 but probably more likely the next research budget.”

This made it extremely valuable for Ireland to be involved in the group, he said. It was important to be knowledgeable about EU research spending priorities and direct Irish involvement would give Ireland an opportunity to influence future EU research directions, he said.

“I am delighted – I am very pleased to serve,” Prof Ferguson said. “I am sure it will be hard work but I relish the task. I hope I can make a positive contribution.”

The High Level Group will take on board the findings from an interim evaluation of Horizon 2020 and will draw on comments collected as part of a public consultation process.

The group will start its work during December and its final report will be published in June 2017.

The Commission in turn will incorporate the group’s recommendations in its own deliberations on the future development of EU research and innovation.

The group will be chaired by Pascal Lamy, president emeritus of the Jacques Delors Institute, and a former director general of the World Trade Organisation.

Martin Brudermüller – vice-chairman of the board and chief technology officer, BASF SE;

Lucyna A Wozniak – vice-rector for science and international relations, Medical University of Lódz;

Milena Žic-Fuch Fuchs – professor, University of Zagreb, and fellow at the Croatian Academy of Sciences and Arts