Inside the mouse house: animal testing in Irish labs 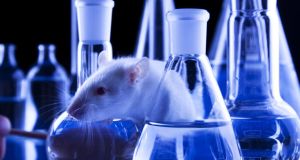 In Ireland, tests must be run on two mammalian species before drug-testing can be conducted on humans. Above: a lab rat. Photographs: Getty Images

Everything inside this modern building is clean and techy, but there is an out-of-place whiff of mustiness too: eau de pet shop. I’m outside the “mouse house”, a facility in a leading Irish research institute that can hold thousands of lab mice. Not all of them are white. Some are black, some brown and black. The mice are in cages on the upper floor, accessed through changing and shower facilities. These are germ-free lab animals and those who look after them must decontaminate before entering.

Scientists rarely enter their living quarters. On the floor below, they use specialist imaging equipment to examine the live mice. There was a sign saying “animal unit” but it was taken down, says a researcher, who asked that the facility not be named.

Animals are used all the time for research, especially in biomedicine, but scientists are split about whether to talk about it.

“The reason many scientists and clinicians keep their heads below the parapet is that they are afraid of extremists sending them stuff in the post,” says UCC cancer scientist Prof Tom Cotter. A spate of extreme violence against researchers in the UK a few years back adds to the wariness. Scientists, though, are concerned about a creeping ban on transporting lab animals, as some airlines have ceded to pressure from protest groups.

It has affected those in Ireland, says Cotter. “It makes it difficult because the animals used for research in Ireland come primarily from the UK. If we can’t get them, then it stops a lot of medical research going on here. Tell that to the patients who are suffering in our hospitals,” he adds.

Cotter’s research on leukaemia has been funded by Cancer Research Ireland, which praises his insights into how cancer cells turn off a vital self-destruct gene. One such gene became the target of Gleevec, a drug for leukaemia. Most of his research involves cells, but he says those who say his work could continue without animals don’t know what they are talking about.

“The human body is a very complex system. Computers can get nowhere near modelling what is going on,” he says. “It’s a big jump from cell lines grown in a lab to a human, so at some stage you have to work in an animal.”

Animal welfare
The replacement of animals is the ultimate long-term goal, says Dr Mark d’Alton of UCD’s biomedical facility. He trained as a vet, and his responsibility is to ensure the welfare of research animals. “If you have an animal stressed by their environment, then their system is flooded by cortisone [a stress hormone] and you won’t get valid scientific results. So it is in the animal’s interest, but also in the interest of good science, to minimise stress,” says d’Alton. The ethical review process in universities is extremely thorough, he says.

He believes in openness. “It’s better to be open about what you do,” he says. “Otherwise, you give the impression you are doing something wrong, which isn’t the case.” But some researchers believe it’s better to say nothing, so as to avoid undesirable elements or comment. Animal rights proponents say secrecy has been used to downplay public concern and to allow for a wider range of animal experiments than the public would allow, sometimes for trivial purposes. Botox tests by industry are cited as one example (see panel).

Better standards
D’Alton, who has spoken to animal welfare activists, says that if reasoned debate leads to better standards, then it is worthwhile. “If you are using a new drug to treat a human disease, you have to check it out on animals first. Otherwise the consequences could be disastrous,” says Cotter. “You have got to balance up the needs of a cancer patient with the use of an animal.” In Ireland, tests must be run on two mammalian species before human drug-testing.

Prof Peter Humphries, a geneticist at Trinity College Dublin, tries to better understand eye diseases such as glaucoma and age-related macular degeneration (AMD). Animal models, he says, are proving invaluable in unravelling the causes of these diseases, as well as strategies for disease prevention. About 25,000 people in Ireland have, or are developing, signs of AMD, a debilitating disease that involves gradual loss of vision.

Animal research is “massively emotive”, says Humphries, but his conscience is clear. He works to reduce human suffering and is also legally and morally obliged to reduce the use of animals in research and obey the 3Rs: replacement, reduction and refinement. He’s concerned that a transport ban could cut off Irish scientists.

The Irish Medicines Board took over regulatory responsibilities from the Department of Health last January.

Botox tests: what’s the alternative?
Tens of thousands of mice each year suffer under severe testing programmes as they are subjected to batch safety tests for cosmetic Botox in Ireland, according to Dr Dan Lyons, who advises the Irish Antivivisection Society.

Mice are injected with huge doses of the toxin to see how much it takes to kill half of them. Lyons says the Department of Health has refused to release information about how many animals they allowed to be used in Botox tests in 2011.

There is a non-lethal test available that could replace these animal tests, but the companies involved have failed to agree commercial terms, adds Lyons.

However, he believes that a European directive translated into Irish law earlier this year offers hope.

This will swap a self-regulatory regime, closed to public scrutiny, for a robust decision-making process, where experiments can be checked retrospectively.

“It should create a more level playing field for public opinion versus professional groups and businesses, who have had their own way in this area,” he says, adding that if “there was a public jury you would see a lot less experiments and less severity than you see now.”

Science has failed to back up rhetoric with action, says Lyons. The number of animal experiments has risen over the past decade in Ireland and the UK, despite increased talk about replacement, reduction and refinement of lab animal experiments.