Hundreds of new discoveries at Stonehenge 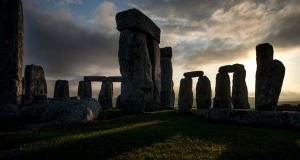 A section of the stone circle of Stonehenge near Amesbury, England: Laser-based topography was used to map the site to an unprecedented accuracy, but a new survey also used radar and magnetometers to see metres down below the surface. Photograph: Andrew Testa/the New York Times

The most comprehensive analysis yet undertaken of the Stonehenge neolithic site has revealed hundreds of new discoveries. More information about a house of the dead where bodies were dismembered and defleshed was uncovered as well as 17 previously unknown ritual monuments.

Laser-based topography was used to map the site to an unprecedented accuracy, but this survey also used radar and magnetometers to see metres down below the surface. “There is so much going on in there, it is immense,” said Prof Vince Gaffney, leader of the Stonehenge Hidden Landscapes project.

Prof Gaffney provided a sample of what was discovered yesterday at the British Science Association Festival of Science at the University of Birmingham. It was partnered in the four-year survey by the Ludwig Boltzmann Institute for Archaeological Prospection and Virtual Archaeology in Vienna.

Most are familiar with 4,000- to 5,000-year-old Stonehenge but this is the most visible element of a much bigger site of human rituals dating back 11,000 years, said Prof Gaffney, who is based at the university.

“What we have started to see is how monument activity accretes from this time,” he said. There was no doubt that social and belief structures formed the landscape underfoot at Stonehenge, he said.

This survey, however, has now looked beneath the surface to reveal hundreds of hidden monuments and features that cover the landscape in all directions.

This was the largest geophysical survey of its kind ever undertaken, said Prof Wolfgang Neubauer, director of the Boltzmann Institute. It covered 12sq km of land surrounding Stonehenge, equivalent to 1,250 football pitches, he said.

Stand almost anywhere on the site and you will see ploughed fields and occasional ring-shaped depressions, but the view just under the surface is very different and reveals the complexity of the structures and their placement.

“The landscape is a totality, not just dots on a map,” Prof Gaffney said.

An example is the “Cursus” at Stonehenge; a 3km-long, 100m- to 150m-wide excavation dug 5,500 years ago before the standing stones themselves were raised, he said. Archaeologists knew little about it “because we never looked inside”, but this has changed with the survey.

Prof Neubauer talked about a long burial mound built 6,000 years ago, now revealed to have been a massive timber structure being described as the “house of the dead” by the research team. It was 33m long and 7m wide and probably used for ritual burial after removal of limbs, exposure of the body and defleshing. The legacy of human use continues to this day, Prof Gaffney said.

The survey clearly reveals the foundations of a first World War RAF base just under the rolling fields. There are even trenches on the site, built to train soldiers preparing to travel to the front in France.

Even more recent traces remain. The equipment picked up the signals from thousands of metal bottle tops left behind by revellers attending the Stonehenge Free Festivals at the site in the 1970s and 1980s. All of these recent additions can be “erased”, however, to show the older monuments, tracks and burial mounds hidden beneath the fields.

BBC Two will begin broadcasting a TV series, Operation Stonehenge: What Lies Beneath, from tomorrow, September 11th, at 8pm.