How the unreasonable effectiveness of mathematics can work elsewhere

Maths tends to fracture into discrete areas, but when it comes together it’s magic 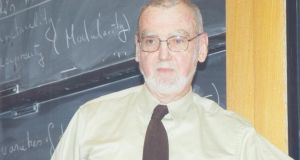 Mathematics expands! Results once proven to be true remain forever true. They are not displaced by subsequent results, but absorbed in an ever- growing theoretical web. Thus, it is increasingly difficult for any individual mathematician to have a comprehensive understanding of even a single field of mathematics: the web of knowledge grows so fast that no one can master it all.

There is a tendency for mathematics to fracture into many disparate areas that seem to be unconnected with each other. An expert in one area attending a conference in another may be utterly incapable of appreciating what is going on. Fortunately, there is an opposing tendency which contributes to unification of the discipline. From time to time, sweeping simplifications arise when seemingly unrelated areas are embraced in a single unifying framework.

An example of this unification was the merger of algebra and geometry by the great French philosopher René Descartes. His coordinate geometry enabled geometric objects such as lines and circles to be expressed using algebraic equations. Geometric results could then be demonstrated by purely algebraic means. Ultimately, the coordinates liberated us from the limitations of two or three dimensions and enabled us to study multi-dimensional and even infinite dimensional spaces. These spaces play a central role in modern theoretical physics.

There is a marked distinction between discrete and continuous mathematics. Number theory and combinatorics are concerned with discrete systems of numbers like the counting numbers, while analysis or calculus treats smooth, continuous curves and surfaces.

There are major endeavours currently in progress to establish connections between number theory and the topology or global geometry of smooth surfaces. An ambitious programme was laid out some 50 years ago by Robert Langlands of the Institute for Advanced Study in Princeton. The “Langlands Program” is a collection of deep conjectures which attempt to build a bridge between objects studied in algebra, which is discrete, and analysis, which is continuous.

The Langlands Program has been called the Grand Unified Theory of mathematics, as it promises the possibility of linking several crucial areas of maths. Substantial strides have been made in recent decades. The result known as the fundamental lemma, proved by Vietnamese mathematician, Ngo Bao Chau, was listed by Time magazine among the “Top 10 scientific discoveries of 2009”. In 2010, Ngo was awarded the Fields medal for this proof.

There are many instances where mathematics and physics have advanced together in a mutually enriching relationship. The Langlands Program is intimately related to modern physics, which seeks to reconcile quantum field theory and general relativity.

If progress on proving further conjectures of Langlands can be made, it may provide yet another example of what has been described as “the unreasonable effectiveness of mathematics in the natural sciences”.

Peter Lynch is professor of meteorology at University College Dublin. He blogs at thatsmaths.com.