How do you find a black box? Ask a Bayesian 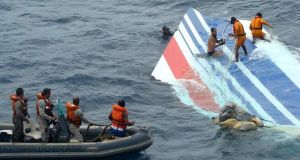 In June 2009, en route from Rio de Janeiro to Paris, Air France flight AF447 crashed into the Atlantic. Bayesian analysis played a crucial role in the location of the flight recorders and the recovery of the deceased passengers and crew. So what is Bayesian analysis?

Classical and Bayesian statistics interpret probability in different ways. To a classical statistician, or frequentist, probability is the relative frequency of an event. If it occurs on average three out of four times, he or she will assign to it a probability of 3/4.

For Bayesians, probability is a subjective way to quantify belief, or degree of certainty, based on incomplete information. All probability is conditional and subject to change when more data emerges. If a Bayesian assigns a probability of 3/4, he or she should be willing to offer odds of three to one on a bet.

Frequentists find it impossible to draw conclusions about once-off events. By using prior knowledge, Bayesian analysis can deal with individual incidents. It can answer questions about events that have never occurred, such as the risk of an asteroid smashing into the Earth or the chance of a major international war breaking out over the next 10 years.

The danger of a major accident for the Challenger space shuttle was estimated by a Bayesian analysis in 1983 as one in 35. The official Nasa estimate at the time was one in 100,000. In January 1986, during the 25th launch, the Challenger exploded, killing all seven crew members.


Informed belief
Bayes’ Rule transformed probability from a statement of relative frequency into a measure of informed belief. The rule, devised in the 1740s by the Rev Thomas Bayes, tells us how to calculate an updated assessment of probability in the light of new evidence. We start with a prior degree of certainty. New data then makes this more or less likely.

An advantage of Bayesian analysis is that it answers the questions that scientists are likely to ask. But, despite spectacular successes, Bayesian methods have been the focus of major controversy and their acceptance has been slow and tortuous. Through most of the 20th century, the academic community eschewed Bayesian ideas and derided practitioners who applied them.

The nub of the controversy was that the probability using Bayesian methods depends on prior opinion. When data is scarce, this yields a subjective rather than objective assessment. When information is in short supply, subjective opinions may differ widely.

The controversy was long and often bitter. The opponents vilified each other, generating great hostility. The war is now over: frequentists and Bayesians both recognise that the two approaches have value in different circumstances.


Peter Lynch is professor of meteorology at University College Dublin. He blogs at thatsmaths.com