How aircraft wind data is helping us to predict the weather 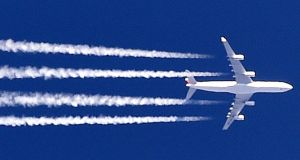 It has often happened that an instrument designed for one purpose has proved invaluable for another. Galileo observed the regular swinging of a pendulum; Christiaan Huygens later derived a mathematical formula for its period of oscillation and used a pendulum to develop the first precision timepiece.

Later, a pendulum was used by Maupertuis to measure the strength of the Earth’s gravitational attraction and thus to determine the shape of the Earth.

A recent example of unexpected utility is the meteorological application of transponders developed for air-traffic management. Accurate wind information for the upper atmosphere is a key requirement for weather prediction. Currently, most wind data comes from weather balloons, wind profilers, Doppler radars and satellites. Mode-S EHS, a novel source of wind data from aircraft flight levels, is helping us to make more accurate weather forecasts.

How does this yield wind data? Suppose a plane is heading eastwards at 200m per second. Its position is known accurately by the satellite-based global positioning system or GPS. Four seconds later, it should be 800m east of its initial position. But suppose there is a wind of 50m per second from the southeast. This will slow the plane and cause it to drift to the north.

The GPS location shows precisely where the plane has gone in four seconds and determines the ground speed. Since ground speed (G) is the vector sum of air speed (A) and wind speed (W), a simple vector calculation gives us the wind. What a delightfully simple application of vectors; what a shame that vectors have been dropped from Leaving Cert maths.

In practice, further adjustments are required to produce high-quality wind estimates. With these corrections and calibrations, Mode-S EHS winds are of a level of accuracy comparable to conventional wind observations. Since air traffic for Europe is planned and co-ordinated by Eurocontrol, the novel wind vectors are potentially available throughout the European region. Currently the coverage includes UK, Benelux and Germany, and more countries are expected to implement EHS radar systems soon. Met Éireann acquires Mode-S data using a receiver in Valentia Observatory and is exploring its value in the Harmonie forecasting model.

Siebren de Haan, a senior scientist at the Royal Dutch Meteorological Institute, has examined the impact of the new observations on forecast accuracy and has found that Mode-S EHS observations are beneficial for short-range wind forecasts. This facilitates air-traffic management and leads to greater fuel efficiency. In addition to wind vectors, the Mode-S EHS data can be used to deduce air temperature data. Temperature is proportional to the squared ratio of the air speed and the Mach number, the speed relative to the local speed of sound. Thus, a simple calculation gives the temperature in terms of measured quantities. But that is another story.