Hoard of artefacts from Enniskillen crannóg go on display

Ancient human body, medieval board game and knives were found in wooden homes 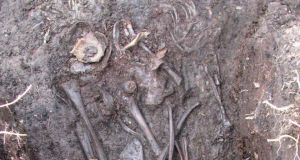 A 600-year-old body found by archaeologists excavating the crannóg site at Drumclay in Co Fermanagh. Photograph: Department of the Environment/PA Wire

Hundreds of artefacts unearthed during one of the most significant archaeological digs in Ireland will go on display for the first time tonight.

Medieval bone combs, finely decorated metal dress pins and a weaving tablet discovered during excavation of the Drumclay Crannóg in Enniskillen have been collated for an exhibition in the Co Fermanagh town.

A 600-year-old human body, pieces of a medieval board game, leather shoes, knives, wooden vessels and a bowl with a cross carved on its base were also found inside the flattened wooden homes, whose site has now been covered by a controversial new link road.

Minister for Tourism Arlene Foster, whose department contributed £20,000 (€23,500) towards the new exhibition, said the display would provide a unique insight into the way our ancestors lived.

“This exhibition is another wonderful example of Northern Ireland’s rich historic past, and I have no doubt that it will be of great interest, not just to local people, but to visitors from far and near.

“As tourism grows, it becomes increasingly more important that destination areas have a clear, differentiated identity. By sharing Northern Ireland’s cultural heritage with visitors, we can reap the economic benefits of tourism,” said the Minister.

Carbon dating has confirmed that some of the site’s earliest structures were laid down around 670AD, but the archaeologists believe that some of the remains are even older. The last occupants are believed to have abandoned the site in the 17th century.

During the dig more than 2,000 people visited on three public open days.

The reason the wooden island settlement has been so well preserved is because the clay-rich wetlands under which it has been buried has protected it from the oxygen required for decomposition.

Minister for the Environment Alex Attwood, who placed special protection status on the site to enable full excavation, described the Drumclay crannóg as the most significant archaeological excavation for a generation.

The exhibition will be housed at the Fermanagh County Museum, Castle Barracks, Enniskillen.