Greg Johnson: ‘Walking through the looking glass in Alice in Wonderland’

While in Dublin for Science Week, astronaut Greg Johnson talked to us about his first launch, space toilets and what they're up to these days on the International Space Station. Video: Kathleen Harris; additional footage Nasa; Tom Pennington/Getty 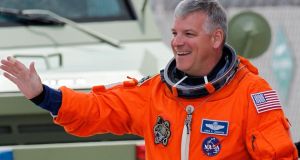 Astronaut Greg H Johnson: ‘There are so many possibilities, I can’t imagine there wouldn’t be some intelligent life’ [in outer space]. Photograph: Tom Pennington/Getty Images)

US astronaut Greg H Johnson became the 472nd person in space when he piloted the US space shuttle Endeavour on a mission in March 2008, a decade after joining Nasa’s space programme. He is a veteran of two space missions, the second coming in May 2011 when he piloted Endeavour’s final flight. He spent just over a month in space in total.

On his first mission, he orbited the Earth 250 times, travelling more than six million miles in 15 days, 18 hours and 10 minutes. On his second, which involved 249 orbits and four spacewalks, he travelled 6.5 million miles during 15 days, 17 hours and 38 minutes in space.

A former fighter and test pilot, Johnson (52) flew combat missions in the first Gulf War. Now a retired US air force colonel, he divides his time between Florida and Texas. He is married with three children.

How old were you when you first dreamed of being an astronaut? It was the 20th of July 1969 and I was seven years old. I was watching a black and white television set at my grandparents’ house when I watched Apollo II, the first lunar landing when Neil Armstrong stepped foot on the moon.

How did you go about becoming an astronaut? I wanted to be a pilot and an engineer. I got a couple of engineering degrees but I became a fighter pilot and was able to use the engineering degrees with flying in the test- pilot programme. Once I became a test pilot I started working with Nasa, I realised that many of the astronauts were test pilots. I said I am going to try do this. Then I just worked really hard. I did what I love doing.

What was the hardest part about training to be an astronaut? As a fighter pilot and test pilot, it takes a lot of time and effort so you lose out on a lot of the family things that other people get to experience. Just prior to your space flight – the year, year and a half before my two space missions – was very intense. There were long stretches of time where my family just could not be the priority.

There were relatively few astronauts, about 120 active in the astronaut corps. We had fewer opportunities to fly into space, so it was a long line to wait for a flight. From 1998 through to 2008 I was in a continuous state of training. It was a challenge for many of us to wait so long for the rare flight opportunities.

What struck you most about the first time you went into space? The first launch – I was very surprised by the feeling of the lift-off. The way I describe it is sensory overload. It was a night launch and it illuminated the night sky. I could hear the sound and intense vibrations of these two million kilos of rocket, which is mostly fuel, accelerating and vibrating, leaping into the air like a wild animal.

It was an incredible experience – the acceleration was continuous for eight and a half minutes and all of a sudden – boom! – the engines cut off and you are floating in micro-gravity. Everything is floating – your hair is floating, your arms rise up. Nothing weighs anything. It was like walking through the looking glass in Alice in Wonderland.

How difficult is it to go to the toilet in space? If you think about a commode or toilet, it is totally dependent upon gravity, from the actual activity all the way to flushing the toilet.

We had a contraption called the Waste Collection System or WCS. It was like an outhouse and you would attach yourself to it because if you don’t, you float away. There were two little handles that were spring-loaded that would hold us down. You line yourself up just right.

For the liquid portion, there was a hose with a special attachment. It had a slight vacuum – it was very clean and sterile. You would just peed in a little hole. As far as the other part, you were just attached and lined up perfectly and make sure you follow the directions and operate it correctly. The solids would be collected by a slight pull of vacuum and it immediately freeze-dried so there was no smell. It was very sanitary. It was actually an elegant way to use the bathroom.

Do you think there is intelligent life in outer space? I don’t think it’s possible for there not to be. I don’t have evidence of intelligent life but if you lay on your back on a very calm, warm night with no clouds and you look at the Milky Way and all the billions of stars, each one of those stars potentially can have a solar system not unlike ours. There are so many possibilities, I can’t imagine there wouldn’t be some intelligent life.

Did the space movie ‘Gravity’ capture the sense of being in space accurately? Many astronauts didn’t like the movie because it was such a stretch scientifically. We know that the Space Shuttle, the International Space Station, the Chinese space station, the Hubble Space Telescope are not all going to be aligned in one orbit and you are certainly not going to be able to travel between those locations with a jet pack. But I loved the movie because the director captured the essence of being in space.

When will people be able to live in space? You can argue that people live in space now because when we go up to the space station, astronauts live in space for six months. These astronauts experience fundamental changes and adaptions that their bodies make in six months. For example, bone atrophy – your brain realises that there is no gravity so your bones naturally deteriorate 1.5 per cent per month. To have a permanent presence, I think the first child who is born in space or the first person who would live their entire lifetime in space is quite a ways off.

What do you think are the chances of mankind landing on Mars in our lifetime? We might get to Mars in the 2030s and if technology advances very fast, we might have a settlement within three to five decades. Our current transportation takes six months to get to Mars. We are looking at a 500-day mission or a 1,000-day mission – six months there, 150 days on the ground and six months back. The other one would be 500 days longer than that. It would be a real commitment of resources and there is a lot of technology we have to develop before we do that.