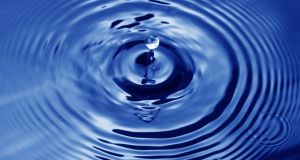 Wave effect: throw a pebble into a pond and waves spread out from the point of impact – a bit like investment in scientific research and education

The scientific world is all aflutter with the announcement last week of the discovery of something called a “gravitational wave”. There are lots of reasons why this is huge for those who want to know more about the Big Bang and what happened after.

The discovery won’t much bother the general public given we can’t see these waves, can’t feel them and have no clue when they pass over us, stretching and compressing space time as they roll by.

The simplest way of understanding them is to picture throwing a pebble into a pond. Waves spread out from the point of impact between the stone and water. Gravitational waves do this, too, but you have to have something a bit more substantial than a stone.

It takes a collision between two black holes or super-massive neutron stars to kick out a really good gravitational wave. If this is all too much tech, then picture the impact of say a merger of Apple and Samsung Electronics. That merger would deliver a financial shockwave to remember.

Gravitational waves can’t be seen but they can be directly detected and this was achieved using two huge devices built with money from the US National Science Foundation in a 15 -country collaboration called LIGO. It has pulled together 83 institutions and involves about 1,000 scientists, so it is quite an endeavour, and somewhere in there among this crew must be some Irish researchers.

Or maybe not. A superficial search identified only one researcher based here who has participated in LIGO, Adrian Ottewill, professor of mathematical physics at UCD.

Should we expect to find Irish researchers working on a big international project like LIGO? I think so. We should be able to find Irish scientists involved in important international research collaborations all around the world. So why are they difficult to find?

In part, it is because governments have been unwilling to pay for Ireland’s membership of these big collaborations. We have long been a member of the European Space Agency – mainly because there is a payback through contracts struck between the agency and Irish companies.

The outgoing Government also saw fit last December to announce we were going to begin negotiations to join two other hugely important collaborations – Cern, the European nuclear research facility, and the European Southern Observatory, which has the biggest telescopes in the world.

This is great news, but will this decision hold with the incoming government? What if it does not believe it is important for Ireland to build a credible international reputation for the conduct of top-class research, something that can help us get our scientists into big collaborations.

The long-standing decision to stay out of most of these bodies was based on money. The cost of membership was higher than the perceived financial benefit returned on the back of company contracts. ESA passed this cost benefit analysis but Cern and ESO did not, at least until last December.

Unfortunately, it is difficult to put a value on the reputational gain to be had with membership and so this is usually ignored. Yet our reputation for good science works like a magnet to attract FDI and major tech companies to our shores, so reputation patently has a value.

Money and reputation are also bound up in another impediment to getting Irish scientists into collaborations – the financial state of our universities and institutes of technology. There has been a slow but steady decline in the State subvention for higher education institutions, matched by an increase in the number of students pursuing third-level education.

It puts these institutions between a rock and a hard place with lecturers handling more students and being left less time to pursue research. The issue got institute lecturers out on strike 12 days ago to highlight the problem.

This turn means less capacity for mentoring of promising postgraduates and post-doc students and fewer openings for them to join research teams.

To this can be added the pressure on researchers to prove the practical relevance of research before the State will help fund it. This is relatively easy to do in the life sciences, but mathematicians, particle physicists and astronomers have more of a challenge.

This means if you are a clever post-doc and you want to play in the big leagues of research you leave, but if your lab has no reputation for research, then you may find it difficult to win a research fellowship in an institution involved in collaborations, such as LIGO or ESO.

Underfunding of third-level drops us into a vicious circle and will serve keep us on the sidelines of international science until we fix it.