The museum holds two million specimens – including a dodo skeleton, an even rarer solitaire bird and a death’s-head hawkmoth – but a lack of funds means only 10,000 are on display

Many of the highlights of the National Museum of Ireland – Natural History remain off-limits to the public due to budget cuts. Museum keeper Nigel Monaghan explains the impact of the cuts and gives us a glimpse of what we're missing. 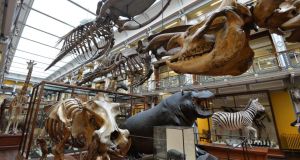 One day at the museum: some of the exhibits at the Natural History Museum on Dublin’s Merrion Street. Photograph: Alan Betson

The tourism and research potential of our Natural History Museum is being dragged down by budget cuts. About 300,000 visitors drop into Dublin’s famed Dead Zoo each year, yet hire freezes mean there is no longer anyone assigned to education or outreach.

The ban has also seen specialist curators retire and not be replaced. The result is that there is no zoological or insect curator at the museum for the first time in decades. Frustratingly for museum staff and visitors, the upper two balconies have remained off-limits to visitors since 2007, when a section of stone staircase collapsed. The keeper of the National Museum of Ireland – Natural History, Nigel Monaghan, says plans were drawn up but put on ice following the crash. He reckons €3 million-€4 million is needed to allow this part of the museum to meet modern safety standards and reopen.

“It means you miss out on the tropical butterflies, the death’s-head hawkmoth [of Silence of the Lambs fame] and a lot of the animals with backbones: the fish, amphibians, reptiles and thousands of birds,” says Monaghan. The dodo skeleton is another off-limits highlight, he says.

“We would be asked by, say, American and German visitors to be allowed go up and take a photo of the dodo. They probably hear about it on social media,” he says. “The bird beside it is rarer. It’s a solitaire. There are only about a dozen of those.”

There is far more behind the scenes that visitors are missing. “Take the sabre-toothed cat skeleton. It would be great to get that assembled and put on display, rather than having it sit in a series of boxes where it has been since 1910 when it was bought. The new Irish state didn’t have a penny in its pocket so never got around to mounting and exhibiting it,” says Monaghan.

Ironically, the banking collapse kept the sabre-toothed tiger in its box and a lot more besides. “We were looking at building a €70 million building in the centre of Collins Barracks, and that would have come with a lot of exhibition galleries,” says Monaghan. “But now the money isn’t there.”

The museum missed its chance during the good times; now exhibits are being packed into boxes and moved to a modern storage facility in Swords. “We have plenty we could put on display,” says Monaghan. “Kids would be able to see dinosaurs and a big sea monster from the Jurassic and a whole pile of other cool stuff, most of which has gone out to Swords.”

He points out some historic specimens. Winged insects from Hobart in Tasmania and Bahia in Brazil, labelled in Charles Darwin’s own handwriting, sit in a drawer. Bahia was where the naturalist first saw rainforest, says Monaghan, and he had sent these items to an Irish fly expert. Nearby Beggars Bush barracks still houses jars of fish collected during the famous HMS Challenger voyage, which explored the world’s deep seas from 1872 to 1876.

Mark Holmes, the zoology curator who retired in 2012, says such specimens need to be monitored, and looking after them is labour intensive. A hundred years ago there were five zoology curators and technicians; now there are none. The Natural History Museum in London has a staff of about 800. “I just hope the stuff survives and eventually they will get new people in,” says Holmes, who, although retired, still comes into the museum to help out.

Mission to the moon

In another room, Monaghan pulls out a plaque with moon rock, given to Ireland to celebrate the Apollo 17 mission in 1972. This is part of a rock and meteorite collection started by a grant from Grattan’s parliament in 1792 to assist exploration here, but there is nowhere to display them. The entire geology collection was evicted when the Dáil needed the space for a restaurant in the 1960s.

“It is sad, because there was an opportunity in a 20- to 30-year period when there was the money. And we had some really good staff, most of whom are gone,” says Monaghan.

In recent years staff numbers have increased in peripheral areas such as administration, security, marketing, but not curation, says Holmes, who worries about the museum’s future. “It’s a terrific collection. Too good for us, in a way, but we should carry on looking after it.”

While some tourist attractions wonder how to draw pundits in, the Natural History Museum on Merrion Street buzzes with thousands of visitors, particularly during the summer. “I am the only one trying to keep the numbers down, because the public is wearing this place out,” Monaghan jokes.

The Natural History Museum holds an impressive two million specimens, but only 10,000 are on display. It’s entire trove includes 25,000 jars of animals stored in alcohol, a million insects on pins, 100,000 fossils and thousands of animals.

A five-year project is nearing completion that has sought to catalogue much of the collection in an electronic database. Before this, most of the specimens were described only in paper log books dating back to the 19th century.

There are also more modern collections. About 450 tissue samples taken from whales and dolphins that beached around the country are stored here, which could assist research projects in years to come. “Each is from a different animal, collected in a different place and time. This is how museums do their job these days. It is not just the Victorian way: kill thousands of things in an afternoon and stick them in a drawer,” says Nigel Monaghan (above), the keeper of the Natural History Museum.

Due to the current lack of curators, overseas inquiries about the possibility of borrowing rare or important items cannot be processed. “If they can’t visit Ireland, they can’t do that research,” says Monaghan. There are staffing issues across the public sector, but the museum is probably worse off than most because of the number of specialised people involved.

For now, the retired zoology curator and retired entomologist come in and lend a hand on a voluntary basis.

“I enjoyed my time here,” says retired zoology curator Mark Holmes. “It’s a scientific institution. I’m sure there are many people who would love to work in the place.”

The museum shop shut earlier this year due to staffing levels. Museums in other countries can generate significant revenue from shops and cafes. How can a shop in one of Dublin’s most popular and free public attractions not make money?